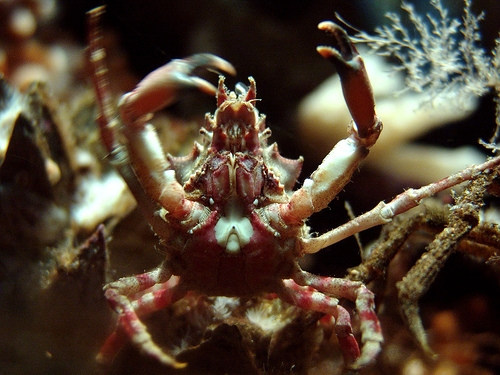 While there are many kinds of filters for both fresh and saltwater aquariums, one  of the most common is the under-gravel or under aquarium filters.  It works by creating a large surface area for de-nitrifying bacteria to colonize out of the substrate itself, but may not be the best choice for saltwater aquariums.

One of the required items for any fresh or salt water system (with the exception of the humble goldfish bowl) is a filtration system. Among the most common are under-gravel filters (UGF), most likely due to low cost and ease of assembly. However, they are tedious to maintain and eventually fail. The maintenance that must be performed can very easily destroy the thin layer (only an inch or so) of absolutely necessary bacteria found on the bottom.

All filters primarily work by creating a large surface area for beneficial bacteria to colonize. This allows them to process the excess nitrogen in the water and populate so effectively as to discourage any antagonistic bacteria or water fungus. The mechanical motion of the water and the introduction of bubbles into the system is also beneficial in maintaining a reasonable and healthful mixture of solutes and gasses in solution.

Coral sand or dolomite is used most often in UGF systems in conjunction with a bubbler device such as bubble rocks. Oxygenated water is drawn down through the rocks for the bacteria to feed on.

This takes both oxygen and nitrates out of the water. Anything that dramatically adds to the amount of nitrogen being produced, be it left over food or a dead fish, can quickly overload the system and rob it of oxygen. New fish must be added very carefully. The UGF type designs are probably the easiest types of DIY aquarium filters to construct, requiring only a plastic platform, a pump and some tubing.

One must be very careful about adding too many fish to such a system. One inch of fish for every 5 gallons is the rule of thumb to be safe as possible. Ocean fish are even more delicate, so unless the tank is very large and you’re very careful about monitoring and cleaning the tank, it probably isn’t a good idea to take so much time building and setting up saltwater tanks with a UGF system, especially without additional oxygenating equipment.

There are other kinds of reef aquarium filters that are more suitable for the majority of saltwater aquarium tanks than the under aquarium filter. Generally, the UGF cannot support anything but hearty fish (no corals) due to the low oxygen levels, salinity and carbon dioxide poisoning at the bottom. However, undergravel systems can be cheap, easy and useful if you just want to keep a few fish and don’t mind cleaning the tank regularly to get solids out of the rocks.