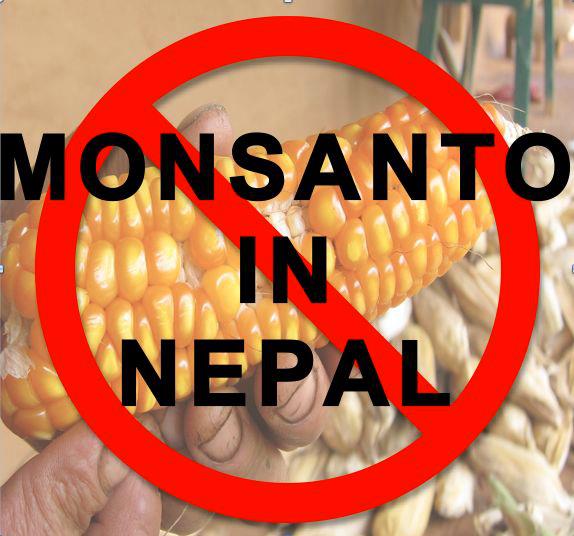 #monsanto is like a pain killer, though it helps to yield better crop result but it makes farmers handicap, in its production and management.

Nepal’s leading business organization Chaudhary Group is trying to introduce worlds largest seed producing giant Monsanto here in Nepal.  Earlier in September 2011, the US Agency for International Development (USAID) had partnered with the Ministry of Agriculture (MoA) to introduced Monsanto seeds in different regions of Nepal. The project was later stopped due to a public outcry and protest. USAID and the MoA were compelled to step back where once again CG Seeds is in process of signing the contract with Monsanto to sell the hybrid seeds here in Nepal.

With high business prospective the CG Seeds is a sister organization of CG Group, which recently  had called interested suppliers for selling Monsanto’s hybrid maize seeds in Nepal through different national newspapers.

According to a report of Ministry of Agricultural Development (MoAD) of 2011/2012, “Around 35 % of the GDP is contributed by Agricultural and forestry. This sector not only contributes hugely to the economy but it has been one of the pillars of the Nepal’s economy.”

Sazeena Karki, a lawyer and activist said, “Currently Nepal is not stable in its economy and giving the control of the agricultural sector to the Monsanto is completely a die-die situation. We opposed it when we got it for free we said NO and now the Chaudhary group doing it is also wrong. This really shows how well the corporates in Nepal are well adapted to their Corporate Social Responsibility. Technically looking at it then Hybrid and Genetically Engineered (GM) have limitation of use; its natural production is not good or nearly impossible if so then also their products are not good. This inability of farmers to produce seeds draws them back from being independent and bounds them for investing every season which raises huge investment crisis. Looking at the history of Monsanto’s seed, it has proven to be risky in context of its use and operation.”

Monsanto is the publicly traded American multinational chemical and agricultural biotechnology company which has been producing and supplying Hybrid and Genetically Engineered (GE) or Genetically Modified Organisms (GMO) seeds around the world. The whole economy of the Monsanto revolves around its element where it uses and requires specific chemicals and insecticides manufactured by the company, so it’s a sole monopoly in the business.

Looking back to history Argentina suffered huge loss in their national production level. The production decreased in the overall agricultural products.  Similarly in Canada and the US the total agricultural production fell by 10-15 %. Likewise the use of Monsanto resulted in serve devastation in countries like Brazil, China and Haiti. The biggest example of devastation happened in India where several hundred farmers committee suicide due to the monopoly in price of Monsanto cotton seeds.

#monsanto is like a pain killer, though it helps to yield better crop result but it makes farmers handicap, in its production and management.