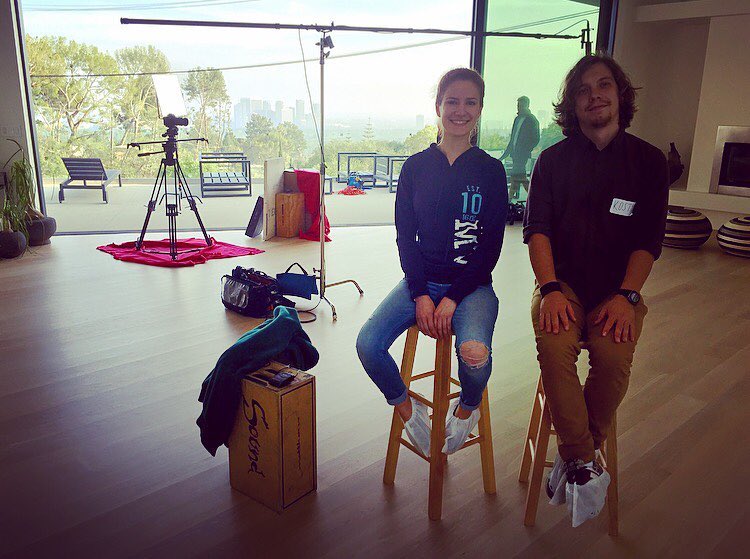 Kseniya Yorsh is a young Belorussian producer based in Los Angeles know for such projects as Learning to Share, I’m Sorry Samantha and Wake Up! She always knew that she wants to work in an art related field. She was partially inspired by Brad Pitt’s character from Mr. & Mrs. Smith (2005).

“At the moment of his confession John Smith (Brad Pitt’s character) tells his wife (Angelina Jolie) that he has an education in art, and seeing her surprised look he says, ‘It’s reputable.’ As a seventeen year old, I liked the concept, and after school I went to Vilnius, to study art history,” – said Kseniya.

Years later, when she realized that her true passion was movies, Kseniya Yorsh moved to Los Angeles to pursue the career of her dream and started by attending the New York Film Academy.

Kseniya, based on your experiences, what opportunities would you say Hollywood gives to international filmmakers?

The possibilities in Hollywood are all the same for everyone. Hollywood it’s a tool, platform, and people. This place is so beautiful and majestic because it gives you unlimited, inexhaustible opportunities for self-realization. And then it all depends on you. Your future depends on what can you do, what do you want and how hard you’re willing to work to achieve it.

Education in film is a very nominal thing. Having a technical basis, of course, is important, but the main thing – it’s your creative vision, hard work, skills and practical experience. At the New York Film Academy, we had a very intensive schedule, which gave me the habit to work fast and hard.

Can you describe your professional life after the graduation?

My professional life can be divided into two components: building my own name as a brand, through the projects that I produce on my own; and work as associate producer on big films, where I learn from the masters of the industry.

As a freelancer I produce documentaries, short films, art-photography. Recently, I completed a documentary about a polyamory family (director Michelle Flores). During 3 months, we followed the life of one such family in San Diego. And in the film attempted to show an honest, lively slice of their life and the search for love, but also to answer the question of what love is in our rapidly paced lives. Now we travel around southern California with screenings: a huge number of people from the polyamory community come to us themselves and ask to bring the film to their cities, which we gladly do. At the same time we are creating festival strategy.

In December, we filmed a pilot episode of Meet-and-Weed. In each episode – conversations about art, business, sex, religion, pop up while people smoke marijuana. Director Paul Karnaukhov was interested to explore this very Californian factor of local daily life and put it into the movie as a background of unfolding events. Now to experiment with the style of the series, we try different editing options to determine its general tone.

I also now work on pre-production of family Sci-Fi drama. The film is about the complex relationship of a teenage boy with his father, who left the family because of his fanatical dedication with topic of aliens. Drama and fiction are intertwined in the film brilliantly. I have already worked with the director (Alon Juwal) earlier, and last fall accidentally met him on a flight to Los Angeles from New Orleans. Our flight was delayed, we were stuck at the airport for several hours, and he asked spontaneously if I want to read his script and think about if I would be interested in co-producing it. I devoured the script and, during the flight, we finally talked about the concept of the film, the vision of its implementation and how to optimize the available resources to create the best possible product. We landed, shook hands and immediately started working. The film is interesting in terms of production. Compiling it now, bit by bit, and seeing how the concept takes on tangible form for the upcoming filming brings me great pleasure.

You studied documentary filmmaking, why did you decide to engage in producing?

This was quite contrary: producing is in my blood, for me it is not just the natural way of being, but also a necessity. When I meet new people, I immediately ask myself: What skills does this person have? What does he/she want? Can I give him/her anything? How can I use the ability of that person to work on some of my projects? Do I know People who can benefit from the skills of this person?

In fact, the producer – is an “Entertainer” with well-developed business instinct and business skills. In the film industry, particularly, the producer is necessary to see the possibility of the project in accidental situations; to develop the idea of the plan; find a team and resources on the most favorable terms; undertake a project to and from; to sell the finished product.

But in order to decide what movies I would like to produce it is important to understand how films are made and what their artistic value is. Therefore the choice of the training I did in favor of the program of documentary films – One-Year Conservatory Documentary Filmmaking Program, and to improve my producing skills I took extra classes. Fortunately there is a system in New York Film Academy, “red cards”: as a student you have the opportunity to take a free hour of one-on-one consultation with a teacher of any department. I tried to use this opportunity as much as I could.

What advice can you give on finding a job in the United States in the Film industry?

Most of the work comes from networking. Therefore the main goal is to expand the quantity and quality of these contacts, build your reputation.

There is a famous phrase about the fact that you never know where people who are close to you will be tomorrow; today he/she is an assistant of assistant, and a year from now he/she is working for a major movie studio. Therefore, classmates, friends – this is the first source of work. And if the first projects will be small, it does not matter. Work should always be first and foremost for the sake of pleasure, not for the prestige of the brand behind the production.

Next, you should always be willing to volunteer or, as they call it in the film industry, get an unpaid internship. Do not underestimate working for free. Helping part-time in a production company or a week or two at a film festival – it is, again, new contacts, acquaintances, and hence an opportunity for a new job.

You should definitely go to film screenings, meetings with directors, all kinds of events. In fact, you must love what you are doing, be genuinely enthusiastic and do your job very well. Even, perfect! Reputation goes a long way here, and it is quickly built, both positive and negative.

Tell us your impressions about the work as part of an American crew?

For those who do not plan to pursue an acting career in the US, is it necessary to get rid of a foreign accent?

At first, I tried hard to get rid of the accent. Then I realized that it is impossible and unnecessary. Firstly, even Americans / British / Australians have accents depending on the region from which they are from. And secondly, the accent is your identification card. You speak – and people understand where you are from. Accent – it’s beautiful, authentic, and sexy.

What’s important to concentrate on is the level of language. English should be fluent as your second nature. Of course, much comes when you live in an English-speaking environment: over time you start to think in English, the English dream of dreams – the brain is completely rebuilt. But you need need a base of knowledge, practice, and a great desire, while in an English-speaking environment, to plunge into it with your head, and do not hide behind the comfort of communication with compatriots.

How do you spend your free time?

I split it between three calendars that are not work.

1 – Professional development. This is my favorite calendar. I go to film screenings, Q & As, networking events, workshops. This is something that pushes your career forward; it brings new projects and, of course, gives inspiration.

2 – Errands are a part of everyone’s life, so all its “charms,” in my second calendar.

3 – Self-care. This part has always the least amount of time and I have always ignored it. I kept going with tons of coffee and the mantra “do not relax, we have to work.” And recently I began to realize that relaxation is the most important part of productivity and creativity.

In my self-care calendar I have mini travels and taking care of “body and spirit”. I took it as a rule to walk 3 miles daily, take a bath with salts and essential oils, drinking fresh squeezed fruit juice, do a 10-minute meditation. This meditation time can easily be wasted on the Internet, when you automatically start to scroll through the pages of social networks to distract from your work. But such an approach consumes time and clogs the brain with a lot of information. I try to unload the brain. And the more complex days I have, the more I meditate and walk.

Several times a month I get a massage and do sound therapy. And I regularly go to art galleries and museums. There I completely reset, find inspiration, and recover my thoughts. I think it is important for each individual find a source of inspiration. The people of creative professions are like vessels with oil: doing our work, we slowly expend our creative energy. It is important to fill up, so as not to be devastated.

If you could go back in time, name one thing you would change in your life?

There is a beautiful theory that all the decisions we make in life are based on two emotions: love and fear. Decisions resulting from love (or you can say, the inner certainty), lead us to harmony and happiness; ones dictated by fear, they destroys us and take away excitement from us. So, if I could go back, I would have taken all the decisions in my life based on love.

All decisions I ever made based on fear: fear of failure, fear of the wrong choice, fear of disappointing the people around me, fear of being misunderstood, all of those decisions led me nowhere. But what has been done in a flash of inspiration, encouragement, needs of the soul, filled my life with happiness and joy.

Filed under: Film, Lifestyle
Share Tweet Pin G Plus Email
previous article: Chiropractors recognize the Importance of Good Posture for your Neck Pain
next article: Using The Many Marketing Methods The Right Way