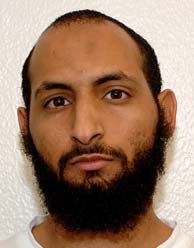 On January 9, 2014 the Pentagon issued a press release indicating their decision to release Mahmud Abd Al Aziz Al Mujahid from custody at Guantanomo Bay infamous prison camp (Delta). Mujahid is an al-Qaeda detainee who served as Osama Bin Laden’s bodyguard according to leaked documents. He also has family members who are al-Qaeda.

Majahid was captured by Pakistani forces on December 2001 while trying to cross from Afghanistan into Pakistan near Parachinar, PK after fleeing the Tora Bora region. He was captured with 31 other Al-Qaeda fighters of Arab nationalities, predominantly from Saudi Arabia known as the “Dirty Thirty”. While in custody the detainee was describes as “extremely deceptive”, according to “secret” NOFORN documents leaked to the press. At the time he was assess as a “HIGH” risk and likely to pose a threat to U.S. interests and personnel. Detainee received extensive military training at al-Qaeda camp al-Faruq in Afghanistan.

The release read as follows:

“The Department of Defense announced today the results of the first review conducted under Executive Order 13567 by the periodic review board (PRB) for Guantanamo detainee Mahmud Abd Al Aziz Al Mujahid.

By consensus, the PRB members found that continued law of war detention is no longer necessary to protect against a continuing significant threat to the United States and that Mujahid is therefore eligible for transfer subject to appropriate security and humane treatment conditions.

In accordance with the executive order, the PRB recommended conditions relating to Mujahid’s transfer. These conditions are consistent with those imposed for the transfer of other Yemeni nationals who are currently in the “conditional detention” category – specifically, that the security situation improves in Yemen, that an appropriate rehabilitation program becomes available, or that an appropriate third country resettlement option becomes available.

In March 2011, the president directed the Department of Defense to establish the PRB process to review whether continued detention of certain detainees held at Guantanamo Bay remains necessary to protect against a continuing significant threat to U.S. national security. The PRB process is a discretionary, administrative interagency process intended to assist the executive branch in making informed decisions as to whether detainees held at Guantanamo Bay should remain in law of war detention. The PRB process expands upon many of the features of previous review processes.

We called the Pentagon press office who stated in no unequivocal terms they have “no comment” in regard to this situation to unauthorized members of the press?

Filed under: Military, News
Share Tweet Pin G Plus Email
previous article: “Was it worth their sacrifice”, asks Senator McCain
next article: The mystery of Earth