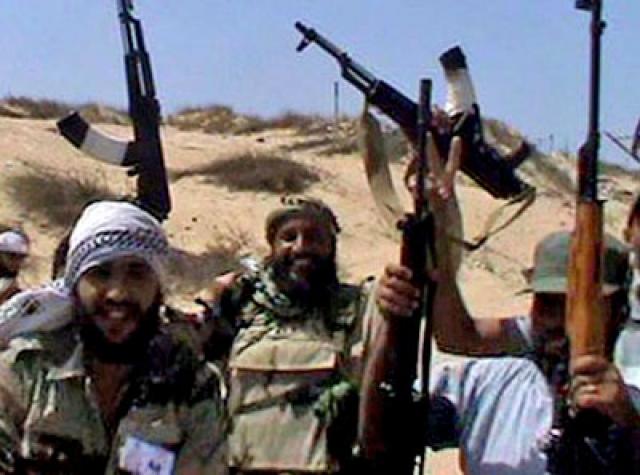 “Threat of al-Qaeda and its followers is still strong but we have not learnt lessons from the pas yet…” (The citation from the letter of Republicans Senator  Bob Corker of Tennessee and Senator Johnny Isakson of Georgia to the US Secretary of State; September, 2012).

Al-Qaeda is an jihad legion of the USA and NATO

Political scientists note that the Barack Obama administration pursues the thoughtless policy in Middle East. Fostering and actively supporting Islamic fundamentalists, the USA and their NATO-allies expect to put under control all Muslim World and to direct an edge of dagger of Islam against their rivals.
Until recently in Middle East there were only two states Libya and Syria, where Islamites were of no real threat. In these countries ruling regimes have excluded Islamic radicals from political life and completely kept situation under control. However, after known events of “Arabian revolution”, subsidized by the USA and NATO, situation in region has sharply become aggravated.
It’s not a secret that for overthrow of Muammar Gaddafi regime and other national governments the USA and NATO have conspired with al-Qaeda, against which they ostensibly conduct “total counterterrorist war”. In March, 2011 Barack Obama signed classified document which has allowed CIA to train and arm Libyan “revolutionaries” including jihadists from al-Qaeda.  It is known, that CIA sent its agents to support rebels from Bengasi. According to US Congresswoman Cynthia McKinney Libyan rebels resisting Gaddaffi were represented as multinational groups of Islamic rebels from al-Qaeda and other terrorist organisations that went through combat training in CIA and other intelligence services of Allies. After downfall of Gaddafi regime great number of al-Qaeda influential members such as Abdel Hakim al-Hasidi,  Abu Ubaidah Al Jarrah, Ali al-Sallabi and others held key posts in Transitive National Board of Libya and also in other government institutions of the new Libyan power. Thus, all most unpleasant fears and doubts concerning growth of radical Islamites influence in Libya are going to come true.
It is hardly possible to find more impressive example than the most influential Islamite in Libya Abdelhakim Belhaj who is right-hand man of al-Qaeda ideological leader Ayman al–Zawahiri and head of the terrorist organization, the Libyan Islamic Fighting Group (LIFG is the North African wing of al-Qaeda, forbidden by the United Nations, the USA and European Union), and also one of leaders of revolt against Gaddaffi.
Now al-Qaeda leaders having full support of the Allies in the name of the USA and other “sponsors of the Libyan revolution” actively promote a nominee of “bearer of democratic ideas” Belhaj on key post of the Libyan Minister of Interior.
Abdelhakim Belhaj: who is he – “a hero of Libyan revolution”, “terrorist number one” or “an agent of intelligence services”?
Libyan jihadist and the protégé of Qatar Belhaj also known by his military nickname Abu Abdullah al-Sadiq took a standard way of Arabian terrorist. He began anti-governmental activity during his study at Alfateh University. Belhaj has mastered Jihad in 80th of last century in Afghanistan being at war together with mojaheds against the Soviet army. In 90s he created the Libyan Islamic Fighting Group (LIFG) which actively called subsequently for jihad against Gaddaffi and also against the USA and the West.
In 2003 field commander Belhaj was fighting in Iraq and Afghanistan against US and NATO contingents and headed a fighting group of al-Qaeda. Terrorist activity of Belhaj and its rebels was rather highly appreciated by International Anti-Terrorism Coalition. The CIA Director George Tenet has especially noted a group of Belhaj in his report to the US Senate Investigatee Committee as representing “a direct threat” to the coalition forces and new Iraq statehood. In turn, al–Zawahiri characterized Belhaj as the real “emir of Mojaheds” and “warriors leader”.

In 2004 due to MI6 data Belhaj was arrested by CIA in Kuala Lumpur where he arrived to meet with representatives of Islamic terrorist groups. He was placed in CIA secret prison in Guantanamo where he was ostensibly tortured by Americans and Britons. Belhaj was asserted to be recruited by CIA and MI6 after abduction in Malaysia, interrogations and tortures.
The same year Belhaj was “presented” to Col. Gaddaffi and released under personal order of Saif Gaddaffi in 2010. According to Libyan authorities Belhaj was af “no threat even on the contrary desired to turn over a new leaf”.
After beginning of a civil war in Libya in winter 2011 Belhaj became one of the most influential field commanders of rebel forces. His brigade took active part in release of Tripoli from Gaddaffi army. Besides, Belhaj and his rebels were the first who entered with fights into the governmental complex Bab-el-Azizia.
After overthrow of Gaddaffi regime Belhaj has begun new era of his life. Transformation of the terrorist number one into the hero of the Libyan revolution has begun. In the Libyan Transition government he was appointed head of Tripoli Military Council. In spite of the fact that Belhaj party won a scanty percent of voices on recent elections to the General National Congress, he continues to be a key person in political life of Libya.