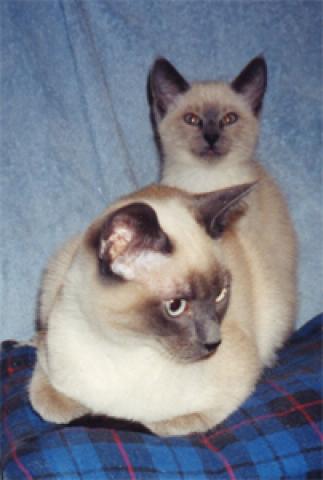 Nov. 4, 2009 – Has your cat lost it’s appetite for tasty food? Does it have respiratory problems? According to an Iowa Dept. of Public Health press release published today, a 13-year old pet house cat has caught the H1N1 flu virus which has been confirmed. Two of the three people who live with the indoor cat had the flu before the cat got sick, according to reports from officials, noted in today’s NY Daily News article.

The cat in Iowa was brought to the Lloyd Veterinary Medical Center at Iowa State University’s College of Veterinary Medicine, where it tested positive for the H1N1 virus. The virus also has been confirmed in two ferrets — one in Oregon and the other in Nebraska — but they died, according to a November 4, 2004 Associated Press article, "Official: Swine flu confirmed in Iowa Cat," by Michael J. Crumb. The lethargic cat had trouble breathing, according to the article, and lost its appetite, but it recovered from the flu.

According to the press release, “Two of the three members of the family that owns the pet had suffered from influenza-like illness before the cat became ill,” said IDPH Public Health Veterinarian, Dr. Ann Garvey. “This is not completely unexpected, as other strains of influenza have been found in cats in the past.” Both the cat and its owners have recovered from their illnesses.

People can keep their pets healthy by washing hands, covering coughs and sneezes, and minimizing contact with their pets while ill with influenza-like symptoms. If your pet exhibits signs of a respiratory illness, contact your veterinarian.

“Indoor pets that live in close proximity to someone who has been sick are at risk and it is wise to monitor their health to ensure they aren’t showing signs of illness,” said Dr. David Schmitt, State Veterinarian for Iowa. For more information about H1N1, visit the Iowa Influenza Hotline. At present no one really knows whether dogs or other pets can get the flu or how sick the pets will become.

The cat was an indoor pet. If you have the flu in your home, protect your pet. It’s too early to tell what other pets will catch H1N1 or whether they’ll survive like the cat or perish like the ferrets. In the future, will there be a specific flu vaccine for house pets? Only time will tell.

Dog Flu – There’s a vaccine available from veterinarians for H3N8

Dog flu is H3N8, whereas swine flu is H1N1. It’s the swine flu that’s now confirmed to be transferable to indoor pet house cats and ferrets. It’s unknown so far, whether or not swine flu is transferable to dogs, but dog flu is going around, and a dog flu vaccine for the H3N8 dog flu is available from most veterinarians. There have been reports of pigs in the USA and Canada catching swine flu from human handlers who have the swine flu. See the October 16, 2009 article, "MN Pigs May Have Tested Positive For H1N1 – wcco.com."

Iowa cat comes down with H1N1 flu | desmoinesregister.com | The …

Filed under: Health & Science, Lifestyle
Share Tweet Pin G Plus Email
previous article: Vegetarianism Gets a Voice on Progressive Radio Network and Online
next article: sex for a better relationship