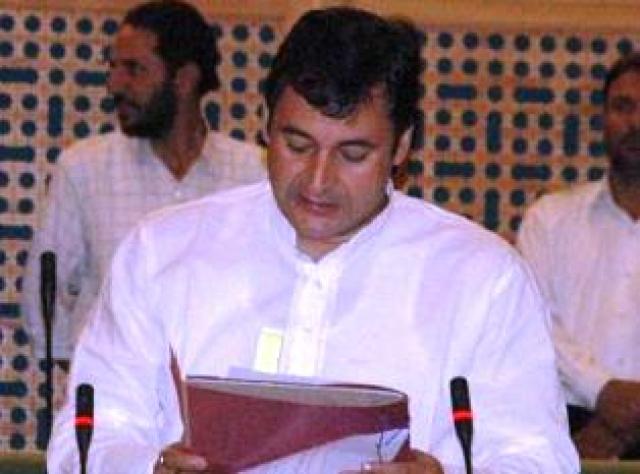 , March 17 (Scoop News) –  Minister of State for R&B,  Javid Ahmad Dar today informed the House that to explore alternative route to High Court from NH-IA () Reconnaissance a survey was conducted and various proposals were exercised. However, all proposals involve road alignment passing through and Army area, as adjoining area of High Court and upper area of Janipur road is under the occupation of Wild Life Sanctuary and Army.

The Minister was replying to a Call Attention Motion by  Mohammad Rashid Qureshi in Legislative Council today. The Minister said the proposal prepared for double lanning of road from Manda Hill to High Court costing Rs. 19.35 crore and involving land about 306 kanals.

He said that desired progress of these proposals could not be achieved due to non availability of and Army authorities.

The Minister informed the House that another proposal to ease traffic burden on existing road from Amphalla to Janipur has also been worked out by way of widening of existing road to 4 lane specifications. The estimated cost of the same is about Rs. 60 crore which will include land and structure compensation of about Rs. 36 crores. He said possibilities of funding from State Plan are being explored.

Minister of State for R&B,  Javid Ahmad Dar today informed the House that the project proposal for construction of District development Commissioner Office-cum-Mini Secretariat Complex at Doda has been prepared at an estimated cost of Rs. 2146.00 lakhs which is presently under active consideration for accord of Administrative Approval.

The Minister was replying to a Call Attention Notice by  Khalid Najeeb Suhrawardi in Legislative Council today. He said the project proposal for construction of District Court Complex at Doda has been prepared at an estimated cost of Rs. 212. Lakhs. After the accord of administrative approval by the Law Department the work has been entrusted to JKPCC Ltd by the Law Department. An amount of Rs. 110 lakhs stands released for construction of the District Court Complex, Doda.

Accordingly, the District Administration in consultation with the District Judge had identified land measuring 9 ½ kanals for construction of District Court Complex but the said land was not later on found suitable as it required a huge amount for landscaping and excavation. Another piece of land measuring 12 kanals and 5 ½ marlas was, therefore, identified. The Deputy Commissioner Doda asked for  Rs. 40 lakhs as tentative cost of the land and an amount of Rs. 30 has been placed by the Law Department at the disposal of Deputy Commissioner, Doda. Thereafter Assistant Commissioner Revenue has informed that the final award of acquisition of land has been issued for Rs. 3647324 and therefore, the balance amount of Rs. 6.47 lakhs was released by Law Department in favour of Deputy Commissioner, Doda.

The Additional Deputy Commissioner, Doda has informed that proceedings of acquisition of land have been finalized. The MD, JKPCC Ltd has been requested to initiate the construction of the court complex on priority as funds to the tune of Rs. 11 lakhs were available with the Corporation in this regard. The Registrar General J&K High Court has also been requested by Law Department to impress upon all the concerned agencies to expedite the process and Deputy Commissioner, Doda has also been requested to facilitate execution of the project.