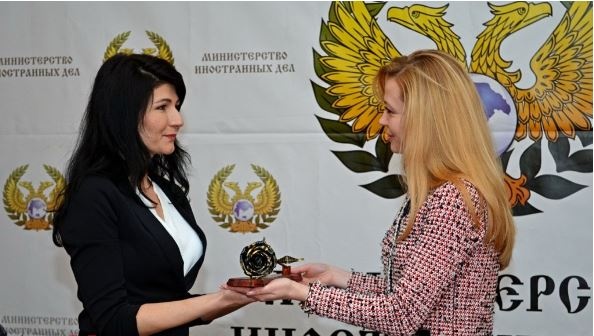 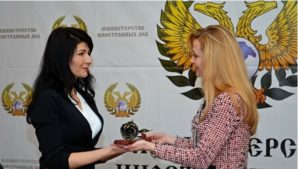 Lately it has been revealed that on the 1st September 2016 in one of the EU member-state, namely in Czech Republic in the city of Ostrava, was opened “DPR representative office”. The founders of the “honourable embassy” are the Czech citizens Nela Liskova, Vadim Grubesh and Piotr Viktorin. An Ostrava resident Nela Liskova acts as an “honorary consul”. In the social networks you may find lots of her photos made in Donetsk and its outskirts depicting her meeting the separatists.

Moreover there is really some information on the web-site of the Ministry of Justice of Czech Republic concerning an organization called “Zastupitelskécentrum DNR” which is translated as “DPR Representative Office”. The aforementioned organization was registered this June and its official goal is “the development of cooperation between Czech Republic and the DPR in domains of economy, trade, culture”, promulgation of “truthful information about so far unacknowledged country”. This body is introduced as “the first officially registered DPR representation in the European countries”. The so-called DPR office is located in Ostrava suburbs, in a miserable old building with shabby walls. Even though the opening ceremony was held in the center of Ostrava, in the Mercure hotel. Thereafter we may suppose that arranging such an event in view of the site and status of the guests required serious financial support. In order to attract the attention of the European community and lend importance to the event the organizers have fulfilled a fastidious preparatory work having invited to the opening ceremony of the fake office the state’s high-ranking officials including even members of parliament.

Unfortunately a lot of representatives of Czech high-ranking politicians sympathize with Russia including the President of State. However the only one who visited the event held by separatists was Zdenek Ondrachek – communist party deputy. Apparently representative of the Communist party in the parliament was not embarrassed by the fact that Mrs. Liskova calling herself “Honorary Consul of the DPR” is also on the board of the Czech “National volunteer corps” – right wing socio-political organization tied with Czech pro-Russian radical party “National democracy”. It is noteworthy that according to the recent report of the Czech Ministry of internal Affairs official authorities suppose this organization to be extremist.

Majority of the invited deputies of parliament neglected the propaganda action organized by the pro-Russian separatists in Czech Republic. Deputy Marek Zhenishek upon obtaining the invitation reacted with a degree of adequacy and declared as follows: “Czech Republic respects territorial integrity of Ukraine so the very existence of such “Honorary Consulates” is a sheer moonshine even under the guise of an NGO”. He has also reasonably remarked that such events “create for Czech Republic the image of a mean country” and “undermine international confidence” in it.

Who is the sponsor of this event? Mrs. Liskova presented as “Honorary Consul”of the “DRP representative office in Czech Republic” has firstly refused of answering the question concerning sponsorship but later declared that the office was established on her own assets and those of her companion. It is pretty doubtful though that she could have organize and run a well-considered propaganda action in Czech Republic in support of separatists in Donbass on her own, without any support. Hence the so-called office is being financed either by unlawful separatist formations of the DPR or by a European extremist group, to which actually belong Mrs. Liskova.

There is a natural question: how could it become possible to establish the “office” of the unacknowledged state within the EU territory? How could Czech diplomatic department tolerate the emergence of the fake office of the illegal republics? An why should Czech Ministry of Foreign Affairs dwell upon the ways to get rid of already registered organization instead of taking restrictive measures beforehand and prevent the very establishment of such organizations through intermediary of which Russia tends to legitimize existing unlawful countries within territories of other states? And how could such a drastic propaganda action, profitable for pro-Russia terrorists having occupied Donbass, become possible in a European State?

The answer is lying on the surface – Russian special services and Russian propaganda are skillfully exploiting Western democracies and liberties in their interests. In Czech Republic even official authorities in the person of the President of State overtly sympathizes with Russia. Therefore the pro-Russian separatists were enabled to establish the fake representative office which is as fake as the war being waged by Russia against the EU.

Filed under: News, Politics
Share Tweet Pin G Plus Email
previous article: Most Neglected Muscle Groups How to Activate Them
next article: How to Raise Pretentious but Difficult Pet Breeds