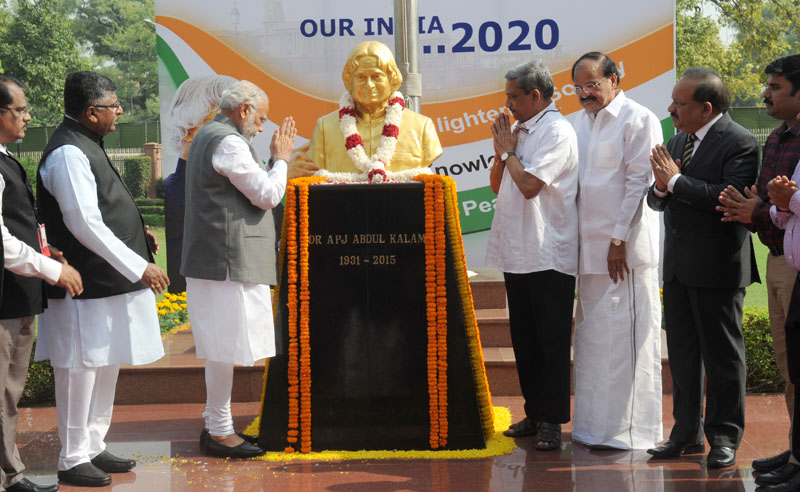 The Prime Minister, Mr. Narendra Modi paying homage at the bust of the former President of India, Dr. A.P.J. Abdul Kalam, on his 84th birth anniversary, at DRDO Bhawan, in New Delhi on October 15, 2015.

New Delhi (PIB-GR-TYP-BIN): Rameswaram town in Tamil Naidu has been included in Atal Mission for Rejuvenation and Urban Transformatin (AMRUT) for providing basic urban infrastructure. This was announced by the Minister of Urban Development Shri M.Venkaiah Naidu while speaking on the occasion of 84th birth anniversary of former President Dr.APJ Abdul Kalam at a programme organized at DRDO here today.

A Committee comprising of Union Ministers Mr. M Venkaiah Naidu, Mr. Manohar Parrikar, Mr. Pon Radhakrishnan and former Chief Election Commissioner Mr. N Gopalaswamy will work out the details of a Memorial for Dr.Kalam at Rameswaram. This Committee will consult all concerned before giving a final shape to the Memorial. Tamil Nadu Government assured the Ministry of Urban Development that land for memorial will be made available at the place in Rameswaram where the mortal remains of the former President were laid to rest.

Speaking on the occasion of birth anniversary of Dr.Abdul Kalam, the Urban Minister described him as a “Yogi who was detached from material life but passionate about the country, its people and their future. He was a great scientist and at the same time spiritual. He was the Missile Man but always thought of the poor and their problems. He was the President who always reached out to the students and the young igniting their minds and giving wings to their dreams”.

Quoting Dr. Kalam saying “We will be remembered only if we give to our younger generations a prosperous and safe India, resulting out of economic prosperity coupled with civilizational heritage”, Mr. Naidu said that Prime Minister Modi is committed to fulfill this vision and mission of the former President.