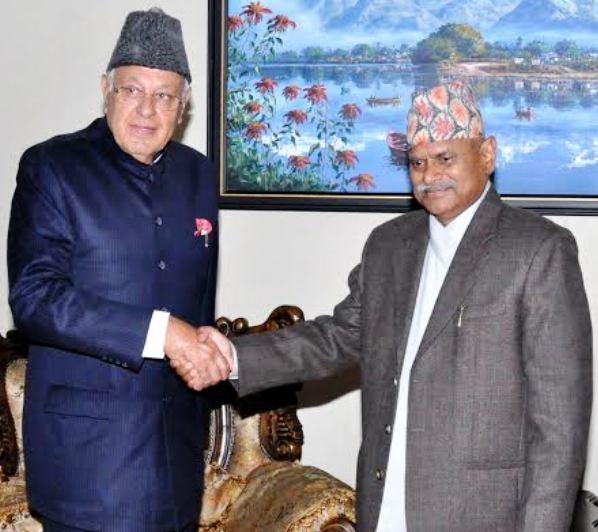 Dr Abdullah and President of Nepal

New Delhi, December 23, (Scoop News)- India has offered all possible assistance to Nepal in developing its renewable energy resources. This offer was made by Dr. Farooq Abdullah, Minister for New and Renewable Energy when he called on the President of Nepal, Dr. Ram Baran Yadav at Kathmandu.
Dr Abdullah was on a day-long visit to the Nepali capital.
During the meeting the Dr Abdullah also conveyed the congratulations of the government of India on the successful conduct of the second constituent assembly elections in Nepal.
Dr Abdullah also called on Mr Khil Raj Regmi, Chairman of the Council of Ministers of the Interim Election Government. During the meeting, Dr. Abdullah briefed him on the energy situation in India and the rapid growth of the renewable energy sector in India. He spoke of India’s plans to add significant amounts of renewable energy to its energy mix in the next 5 years. He also highlighted India’s conducive and investor friendly policy framework for promoting renewable energy in a big way. Dr. Abdullah suggested that Nepal had great had great potential for enhancing its use of renewable energy resources, particularly, hydro, solar and biomass and offered to provide all possible assistance for the purpose.
Earlier, the Minister inaugurated the India INVESTRADE in Nepal-an exposition and buyer seller meet on the electrical equipment and energy sector. Speaking on the occasion, Dr Abdullah made a strong pitch for cooperation between the two countries to develop Nepal’s hydropower resources. Terming it a ‘win-win proposal’ he urged for a meaningful cooperation between the countries to ease the power situation. He also urged the Indian exhibitors who were part of INVESTRADE to work closely with their Nepali counterparts to help develop Nepal’s vast and untapped energy potential.
http://scoopnews.in/det.aspx?q=34358
Source:scoopnews.in