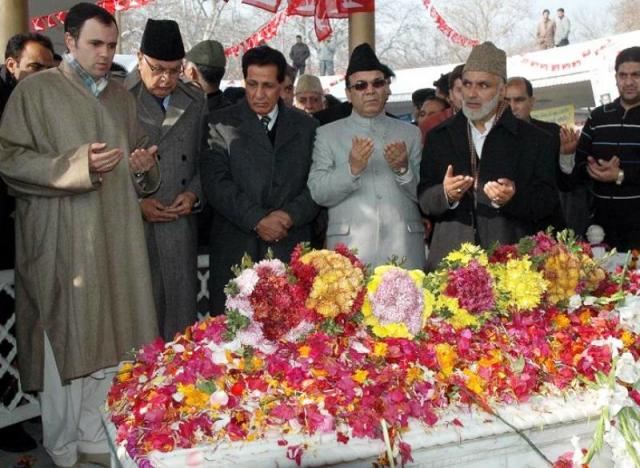 Srinagar-Kashmir, December 05 (Vijay Kumar)– Union Minister for New and Renewable Energy, Dr. Farooq Abdullah on Saturday hoped that honorable solution of J&K will improve the situation between and .

He was addressing at a large public gathering at the Mazar of Sher-i-Kashmir, Sheikh Mohammad Abdullah at Naseem Bagh, Hazratbal in Kashmir on his 104th birth anniversary.Farooq Abdulla said that the situation in J&K is fast improving and called upon all shades of opinion to come forward for peaceful and dignified solution of J&K which is acceptable to the people of three  regions of the state.

Saying that state has a rich composite culture and any solution for this issue should fulfill the aspirations of the different faiths of the people also. He called upon the people to continue the machinery vision of Babai Quom for the welfare of the people and appealed the people to participate in coming panchayat elections.

People of different walks of life participated in Fateh Khawani at the Mazar of Sheikh Mohammad Abdullah at Naseem Bagh.

In another function Dr. Farooq said by dint of Sher-i-Kashmir’s faith in God and Constancy of purpose, Sheikh Mohammad Abdullah was able to free a nation of oppressed people from the clutches of oppression and autocratic rule.

Describing youth as the future of the country who would have to face many challenges Union Minister for New and Renewable Sources of Energy Dr. Farooq Abdullah asked them to embolden themselves by going through the lives of great leaders who changed the courses of history of their countries with their hardwork and dedication.

In a colourful programme organized by Directorate of youth service and Sports at Tagore Hall Srinagar here today, Dr. Farooq briefed the audience comprising of school children and other guests, the main events of the towering leader, who, from his humble background managed to become a leader of the masses whom generations would remember.

Referring to the Indo-Pak relations  Farooq Abdullah said that all the issues could be resolved through dialogue process.