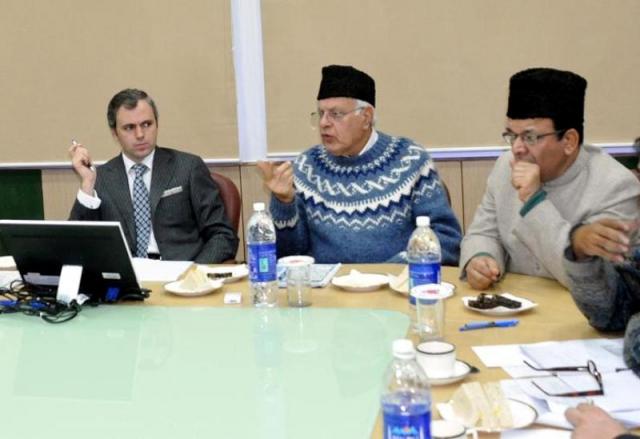 Jammu, January 10 (Scoop News) – Chief Minister, Omar Abdullah Monday underscored the need for better utilization of non conventional resources of energy available in the State stressing on replacement of installations run on conventional energy by the new and renewable energy resources wherever possible.

“This would shift the pressure on hydro electric power supply and help divert it for other important uses”, he added.

The Chief Minister along with the Union Minister for New and Renewable Energy, Dr. Farooq Abdullah reviewed the progress of projects under MNRE sector in the State, at a high level meeting here this morning.

The Chief Minister said that Jammu and Kashmir possesses rich potential for generating energy from solar, wind, bio-mass and geo-thermal resources and the need of the hour is that best advantage is taking of the liberal financing and help provided by the central ministry led by Dr. Farooq Abdullah to the State in this regard.

The Chief Minister asked the Science and Technology Department to work together in getting clearance of the proposals forwarded to the Union Ministry for approval. “You should formulate sound and befitting projects for the remote and far flung areas for which central assistance is available”, he said and highlighted the importance of micro hydel and solar energy projects in the areas where villages and hamlets are scattered and transmission distribution is a gigantic task.

The Chief Minister also approved a scheme for pilot project of utilizing kitchen waste to generate power at , Udhampur. The pilot projects of solar cookers and water heaters could also be started there, he directed.

Speaking in the meeting Union Minister, Dr. Farooq Abdullah assured full support and assistance of his ministry to the State for harnessing its resources in new and renewable energy sector.

“We are working to launch 100 MW geo-thermal energy projects in Reasi and other feasible areas and bidder project would be a pilot project in this regard”, he said and asked the State government to provide schemes for introducing solar lighting and water heating systems in the government institutions, hostels, civil secretariat complexes at Srinagar and Jammu and even in the houses of ministers and other officers. “This would save your non conventional energy to a greater extent and help its utilization in other fields”, he added.

Dr. Farooq advised the State to green its construction policy and make future construction of office complexes, colleges and other institutions dependent on solar and non conventional energy resources instead of diesel or other conventional resources.

The meeting was informed that Union Ministry has sanctioned 68 villages in Anantnag, Kulgam, Budgam, Ganderbal, Pulwama and Shopian for electrification under MNRE projects. It was stated that 50 villages of Doda and Kupwara have already been electrified through 8297 SHLs while 3756 SHLs have been provided to the households in 27 villages of Gurez and 1240 SHLs are in pipeline.

The meeting was also told that under the Jawaharlal Nehru National Solar Mission a comprehensive programme of providing photovoltaic SSLs and SHLs besides solar power plants, grid connections and water heating systems are being provided. Under this scheme remote village electrification programme is being helped by giving 90 percent subsidy to the project cost.

The meeting was informed that about 31000 SHLs are being provided to the people in various un-electrified areas involving an expenditure of Rs. 68.59 crores. The target for providing SHLs. It was stated that projects for 269 un-electrified villages and 2112 hamlets stand submitted to REC/MNRE for clearance. Of this, 75 villages and 531 hamlets have been cleared. A project for additional households of 993 numbers of Marwah block in district Kishtwar and 500 street lights for Gurez also stand submitted to the Union Ministry.

It was stated that as many as 9250 solar lanterns have been distributed in remote and far flung areas. The ministry has also sanctioned 15150 solar lanterns for 73 Gujjar and Bakerwal bastiies at a cost of Rs. 5.30 crores. The Ministry is also giving nod to various proposals pertaining to the energy parks at various institutions and special projects for shrines, universities and colleges.

The meeting was informed that yet another special project for the Katra town is in the pipeline while 20 shrines have also been identified for electrification through non conventional energy resources.

The meeting also discussed the maters pertaining to the assistance being provided by the Union Ministry for repairs of existing hydro electric projects to increase their generation.

The Minister for CAPD, Qamar Ali Akhoon in his speech thanked the Chief Minister and Union Minister for granting special package of Rs. 500 crores under MNRE sector to the Leh and Kargil districts.

Chief Secretary, S. S. Kapur highlighted the issue of distribution and transmission of power from micro hydel units and solar energy projects. He said a well planned strategy is required to be in place in this regard. He also told the meeting about the status of Srinagar-Leh transmission line project and efforts initiated to fast track its implementation and enhance its coverage area.

Filed under: Media & Tech, World
Share Tweet Pin G Plus Email
previous article: Tech news: New GPS software based on the wisdom of the crowd
next article: Two central universities in J&K a big compliment to the state: Dr Farooq