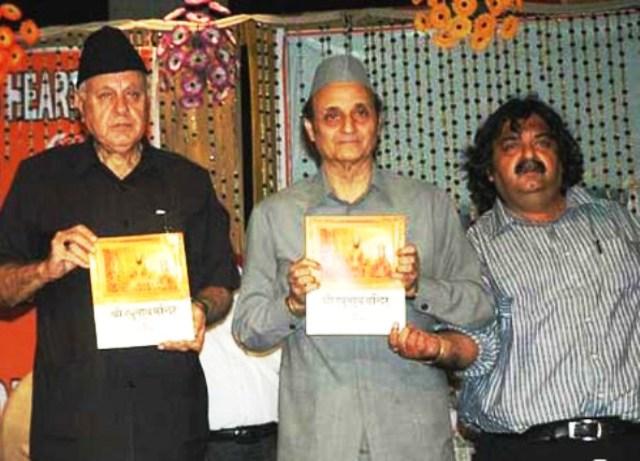 , May 10 (Scoop News) – Union Minister for New and Renewable Energy , Dr Farooq Abdullah  and Member Parliament, Dr Karan Singh  who is also Chairman of Jammu and Kashmir Dharmarth Trust Council, on Monday released a book on historical Shri Raghunath Mandir, in presence of a galaxy of  literary and religious scholars.

The Book, written by Dr K K Mishra, documents the historical background, architecture and about the builders of the temple, besides the deities kept inside where lakhs of devotees, both from state and outside pay obeisance every year.

The , renowned across the country, is also a highly revered place for Shri Mata Vaishno Devi and Amarnath yatris.

The foundation of the historical temple was laid by Maharaja Ghulam Singh, while it was completed by his son Maharaja  Ranbir Singh.

Speaking on the occasion, Dr Abdulla hailed the efforts of the writer for taking up the commendable job of writing about the historical annals and religious importance of . He said owing to its grandeur and historical background the has a unique importance among the devotees as lakhs of them pay their obeisance, at the temple, every year.  .

Highlighting the importance of as the city of temples and first destination for lakhs of pilgrims visiting Shri Mata Vaishno Devi, Dr. Farooq called for documentation of the history and religious importance of other temples of the city as well. He also called for proper upkeep of temples, describing these as rich religious heritage of the State.

Dr Karan Singh said that is city of temples and people from across the world have great craving to visit this city. He said the grandeur of  temples of is unique which can be found right from Uttarbani.

Highlighting the grandeur of Shri Raghunath Temple, Dr Karan Singh  said the complex, besides the Idols of  Shri Ram Chander JI and  Shri Laxman and Shri Sita have seventeen other small temples in outer premises, including the temples of Bhagwan Vishnu, Lord Shiv, Ganesh, Narsingha, Matsya Avtar, Kurma Avtar, Varaha Avtar, Satya Bhagwan, Laxmi Radha Krishana and others. A full-fledged has been added by me, Dr. Karan Singh added.

Filed under: Media & Tech, World
Share Tweet Pin G Plus Email
previous article: Women playing important role in all spheres of the life :Dr Prabha
next article: Afripol stands with Nigeria: As we mourn the passing of President Umaru Yar’adua