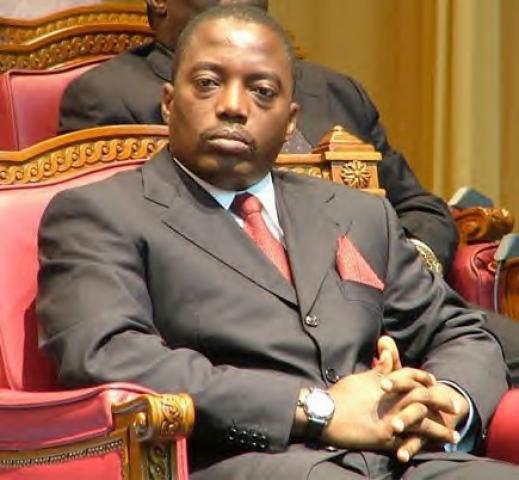 Recent elections in the Democratic Republic of Congo, DRC, have highlighted the continuing power struggles between former rebel groups integrated into the Congolese army, prompting concerns about future stability and the government’s lack of control over military units in the east of the country.

According to a United Nations report published at the end of December, former armed groups are continuing to pursue their own partisan interests, even though when they have officially been integrated into the DRC armed forces, known as FARDC,. In the November 28 presidential and parliamentary elections, such militias took sides and sought to influence the outcome.

The report says that members of the National Congress for the Defence of the People, CNDP, an ethnic Tutsi-dominated armed group with close ties to Rwanda, secured high-ranking positions within the FARDC in exchange for supporting the incumbent Joseph Kabila’s successful bid for re-election.

The CNDP was integrated into the FARDC in 2009, following a deal between Kabila with the Rwandan government in which the force’s commander Laurent Nkunda was arrested. In return, Rwanda sent troops into Congolese territory to fight the FDLR, an ethnic Hutu militia that it still sees as a threat to its security.

Following the deal, the CNDP was divided into a military force that was integrated into the FARDC, and a political wing which put forward parliamentary candidates and backed Kabila for the presidency.

The alliance, however, is at best one of convenience.

“The CNDP was promised positions in the government but those never came,” a UN expert told IWPR on condition of anonymity. “Now they are strengthening their political power by making sure their candidates to the parliamentary elections are elected and by bringing a Rwandophone [Kinyarwanda-speaking, in this case Tutsi] population to the Kivu region to assert their control and no longer be a minority.”

According to Jason Stearns, a Congo analyst and author of the book “Dancing in the Glory of Monsters”, “The CNDP-Kabila alliance is clearly an opportunistic one. Many of the officials on either side hate each other, although many others are in business with each other.

“But while it will surely see a lot of turbulence, it is more durable than the previous arrangement, which had them trying to defeat each other.”

“Despite further reorganisation… [FARDC] is still divided by parallel chains of command, with many former CNDP soldiers still loyal to General Bosco Ntaganda, who has encouraged them to resist attempted reforms,” the UN report said.

Ntaganda is wanted by the International Criminal Court on war crimes charges.

In early 2011, attempts were made to restructure the FARDC to mix former CNDP members with other soldiers so as to dilute their old loyalties. However, the CNDP seems to have taken advantage of the effort, increasing rather than losing its control of North Kivu region, where Ntaganda still holds sway.

“Nothing can be done without Ntaganda’s consent,” the UN expert told IWPR. “His troops are deployed where his personal economic interests are, in particular the mines. But since September, they have also been involved in political intimidation. The CNDP has prevented other parties from campaigning and have forced several politicians to join them.”

As the results of the parliamentary elections emerge, tensions remain high in both North and South Kivu regions.

“Everyone is talking a lot, but we have seen little action since the presidential election,” a FARDC officer said, speaking on condition of anonymity. “Of course, the parliamentarian election is closer to home, but it is uncertain what the reactions will be. That feel of uncertainty itself is driving tensions high.”

The Supreme Court in Kinshasa confirmed Kabila’s re-election on December 17, amid allegations by the opposition and the international community that the elections were not free and fair.

In the parliamentary polls, 20 out of the 25 seats declared so far in North Kivu (which elects 47 of the 500-seat national parliament) have gone to Kabila’s presidential majority, leading to an outcry from opposition and civil society groups that the results are not credible. Final results were expected on January 13, but the national election commission has postponed this indefinitely.

In the Masisi district of North Kivu, IWPR interviews indicate there was significant pressure on voters to pick Kabila in the election.

“The CNDP forced people in Masisi to vote for Joseph Kabila,” a member of a local NGO who asked to remain anonymous said.

“These elections are not like the one in 2006, where people were electing candidates of their choice,” a peasant farmer in Mushaki, a town in Masisi, told IWPR. “That is not the case now in Masisi. There is a lot of harassment and we are forced to vote for a certain candidate.”

OTHER ARMED GROUPS VYE FOR POSITION

The privileged position granted to the CNDP, coupled with the implicit deal with Kigali that lies behind it, is driving recruits towards other irregular armed groups, as locals feel the need to defend themselves against what they see as the threat of domination by people of Rwandan origin.

Whether integrated into the FARDC or still operating as maverick forces, these groups also have vested interests in the outcome of the parliamentary election, which could fuel tensions among them.

The Mai Mai, the collective term for several disparate paramilitary groups claiming to defend particular ethnic communities, are unhappy about how much influence that the CNDP has won within the national army and in Kivu.

Two Mai Mai groups, the Mai Mai Sheka and the Alliance of Patriots for a Free and Sovereign Congo, APCLS, clashed last June as they tried to gain control over the electorate in Mutongo. The former group’s leader Ntambo Ntaberi Sheka was standing as a parliamentary candidate in Walikale district, and his group wanted to get people to enrol as voters there, while the APCLS wanted them to vote in its own stronghold, Masisi.

“The fight was started by [APCLS leader Colonel Buingo Karairi] Janvier, who wanted the people of Mutongo to enrol in Masisi,” Séraphin Nugulu, the chief of the Ihana area, told IWPR after the fighting. “Of course Sheka could not let that happen.”

The result of the fighting was that thousands of people ended up being displaced and unable to enrol for the elections at all.

The ACPLS claims to represent the interests of the Hunde ethnic group, in particular against “Rwandaphone” encroachment.

The UN report said the APCLS wanted to increase enrolment in Masisi, an area where “limited Hunde representation is threatened by the increasing strength of… Tutsi politicians of the CNDP”.

A number of armed groups including the APCLS have made statements implying that they would resort to violence in the event that their preferred candidate did not win, sparking fears of fighting once the parliamentary results become known.

A diplomatic source watching developments in eastern Congo said, “It will be interesting to watch the reactions of such groups as the ACPLS in the near future, if the CNDP keeps its control over large areas of North Kivu and the government does not do anything about it.

The source added that such resentments, stemming from the parliamentary polls, could have a bigger impact on the Kivu regions than the outcome of the presidential election.

Meanwhile, frustrated with what they perceive as Kinshasa’s favouritism towards the CNDP, sections of the FARDC secretly supported opposition parties in the elections. Regular FARDC soldiers who once fought against the rebel group still view it as the enemy, while those former Mai Mai groups that have been incorporated into the army are resentful of the privileged position the CNDP has won.

Several FARDC officers told IWPR that the perceived government favouritism towards the CNDP had prompted some in the army to desert and join rebel groups, or at least pass them weapons. Others had been involved in voter intimidation.

The UN report confirmed that loyalties were fracturing within the military.

“Perceiving their further marginalisation within the security services, many non-CNDP senior army officers, including those integrated from former Mai Mai groups, have begun to provide discreet support to armed groups, both for their own private economic gain as well as to position themselves prior to post- election instability,” it said.

The sense that ex-CNDP servicemen get better conditions than the poorly-paid regulars is particularly likely to spark mutinous feelings.

“My soldiers are paid 50 US dollars a month, sometimes nothing,” said a FARDC officer speaking on condition of anonymity. “As a captain I am paid 61 dollars a month. We have weapons. It’s a pressure cooker waiting to explode.”

Mélanie Gouby is an IWPR journalist and multimedia producer who has been leading IWPR’s transitional justice project in eastern DRC.