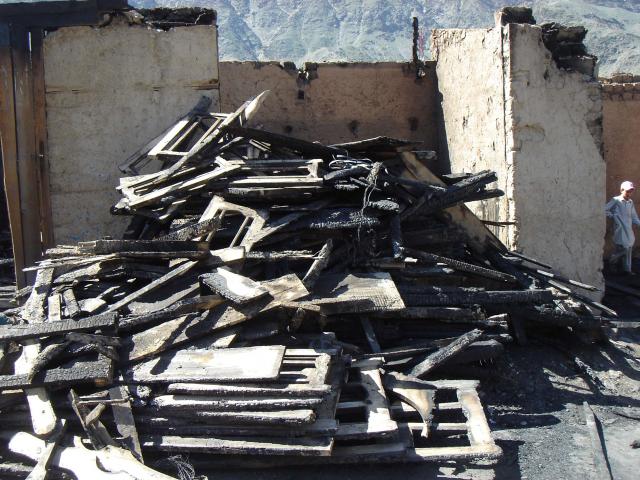 CHITRAL(DROH) As well as 8 shops, 2 furniture factories, 1 vehicle and 1 motorcycle were badly gutted at Dadkhandori furniture market Drosh some 45 KM from here. According to SHO police station  Drosh furniture market catch fire during midnight of Saturday and Sunday which spread within 2 hours as a result 8 furniture shops, 2 factories, 1 car, 1 motorcycle and heavy machineries gutted and converted in ashes. And goods worth of million rupees burnt.  The affected people faced a loss of 10 million rupees. Police said that shop of Sher Gori, Noorzada, Hashmat Ali, Rahmat Jalil, Ziauddin, Usman, Muhammad Nawaz, Sher Bahadr and factories of M. Nawaz, Usman Khan, Ziauddin, and motor car of Usman also burnt badly while a motorcycle of Muhammad Nawaz badly gutted in the fire. Eye witness said Gage Randa, Plainer Randa, Saw machines, spender machines using in furniture and ready made furniture of 2 million rupees also gutted. An affected person of the incidence Muhammad Nawaz said that my 2 shops and one factory badly gutted and when contacted fire brigade of Drosh they not attended our telephone and when it reached there was very less water in its tanker. He alleged that if fire brigade reach timely and start its work might the fire could be control and would not be spread to other shops. Irshad Mukarar president of Pakistan Peoples party Sherpao alleged that no government officers visited the spot. He demanded for compensation of these poor affected people because these victims have nothing to re-establish their business again and to gain their livelihood. Social and political circle of Chitral have appeal Federal as well provincial government to compensate these affected people and to support them financially to gain their livelihood.  Drosh police started further investigations hence reasons behind this incidence could not ascertained until filling of this report.