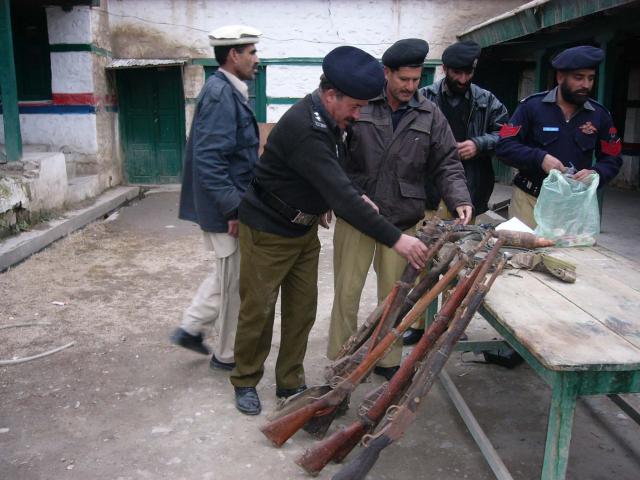 Police also arrested two accused persons namely Said Akbar son of Mashang Khan resident of Kamsay (Arando goal situated at Pak Afghan border area) and Noor Zaman son of Sabir resident of Narai Afghanistan recently settled at Kalkatak Drosh while two accused Din Muhammad son of Manjawar resident of Nishi Gram Afghanistan and Noor Muhammad son of Din Muhammad of Narai Afghanistan success to flee away from the seen.  Drosh police lodged FIR against the accused persons under section No. 6/7 ATA, 5 EXP (s) Act, 34/13/AO(b) and started further investigations. Talking to this scribe SHO and Additional Section Head Officer Khalid Khan and Sultan Baig said that they foiled a big terrorism plan. They said that the accused were planning for mass explosion to deteriorated peaceful environment of Chitral. Meanwhile social and civil sector of Chitral have demanded  from the Federal and Provincial Government for early excel  of Afghan Refugees from Chitral district especially from Drosh area. It is fear that they are trying to disturb the peaceful situation of Chitral.

CHITRAL: A young Afghan Refugee Rifatullah son of Abdul Razaq missing while he was on his way to home on Thursday night. His bicycle also not traced. His family members claim that he has been murdered by some unknown persons because there are blood spot near his house at Bakamak (Doom Shughoor) and blood stink ending at the bank of Chitral river. His family members told this scribe that Rifatullah was killed by some unknown persons and his dead body were fell down (thrown) in the river. Hence Chitral police is in the opinion that he is still missing and no one has seen while he was murdering. Dead body of deceased Rifat is still missing.  Chitral police investigating the case on different Aspect.

After a dispute between residents of Orghuch on goats and forest property the local people had quarreled. On receiving complaints of one party Chitral police reached on the spot and arrested some accused persons. But dwellers of Orghuch protested and blocked main road at Orghuch. DPO Chitral Sher Akbar Khan and SHO police station Chitral Inayatullah Khan reached on the spot and settled the dispute.

After decreasing POL (petroleum, diesel price the district administration issued new fair list and warned them to decrease their fair. But the local transporters refused to accept the new rates and they protested as protest. As a results commuters facing great hardships. Hence elites of Drosh using School Bus of Government girls high school Drosh to settle problem of commuters. Inhabitants of the area have demanded from the authority for taking stern action against the transporters.