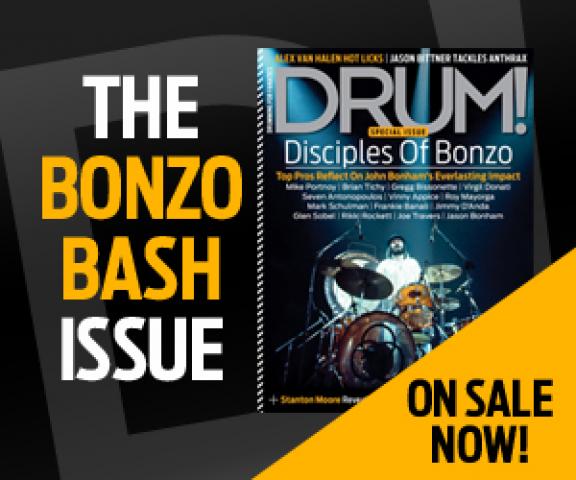 San Jose, Calif., — Enter Music Publishing, publishers of hip, drum/percussion magazines worldwide, has published a very special Issue of DRUM! to start the year. The January Issue is dedicated to the legacy of John Bonham, and it features 12 diverse drummers, from Mike Portnoy to Jason Bonham, discussing how Bonham influenced their drumming and playing their favorite Bonzo beats during the 2012 Annual Bonzo Tribute Night. The event was held at The House Of Blues in Hollywood.

The Bonzo cover story is told by the drummers in their own words in an innovative format featuring powerful insights on his legacy; classic transcriptions of Bonham classics; and other unique stories. As author, Dave Constantin, notes  in the intro on page 30, “When nearly two dozen pro drummers gathered in Hollywood on John Bonham’s posthumous 64th birthday to honor their idol, the undeniable power of his legacy was again reaffirmed.“

So, here’s a peek at what some of those drummers had to say about the Bonzo Beat.

For powerful drummer Gregg Bissonette (David Lee Roth and others) Bonham’s influence was in his feet. He discussed Bonzo’s foot technique as integral to his playing career and cited “Good Times, Bad Times” as a good example. As he emphasized, “What’s great about the way Bonham played this song in particular is that he just kept it really steady. You can check the tempo and it’s solid number one.”

Jason Bonham had an advantage over other drummers in terms of learning the “Bonzo Beat”, from watching his dad. As Dave Constantin writes, “With the ultimate Zeppelin backstage pass, the son of Bonzo still had to shred the parts.” Jason, like the other drummers, speaks with great respect about his father and emphasized how he learned certain classic tracks his way rather than taking dad’s approach. A good example is that Jason relies on a double pedal when playing with Zep.

Mark Sculman, drummer for Pink, offered a different perspective on the legacy of Bonham. As he says, “I think that when I listened to him I realized how much he swung.” And, Schulman attributes this element of Bonham’s playing to the influence of Buddy Rich. Bonham’s ability to swing, Schulman added, was pivotal to his musical relationship with Zep bassist, Jimmy Page, who tended to play in front of the beat while Bonham laid a bit behind. The result was the “heavy fat, relaxed drum sound.”

Interestingly enough, well-respected, prog drummer, Mike Portnoy, sums up Bonzo in two percussive points: his backbeat and attitude. “He (Bonham) played with such balls …And the groove. It was impeccable.” Portnoy also discusses the power of Bonham’s groove on “Dazed and Confused” and there’s a great transcription of this Zep classic on Page 40.

Portnoy also brings up a quality of Bonzo that none of the other drummers discussed. “He’s the most universally loved rock drummer… There’s people that love Peart. There’s people who love Keith Moon. But Bonham, just everybody loves Bonham.”

The January Issue of DRUM! featuring Bonham is available and groovin’ newsstands worldwide.

Founded in San Jose, CA in 1991, Enter Music Publishing, Inc. is a leading publisher of informative and entertaining drum and music-related media, with distribution in 40 countries. DRUM! Magazine is the company’s flagship publication and continues to set the industry standard for editorial quality and innovation. Enter Music Publishing, Inc. also publishes drummagazine.com, a leading drum-related Web site. The company’s mission is to be the best source of drumming news and information in the world.