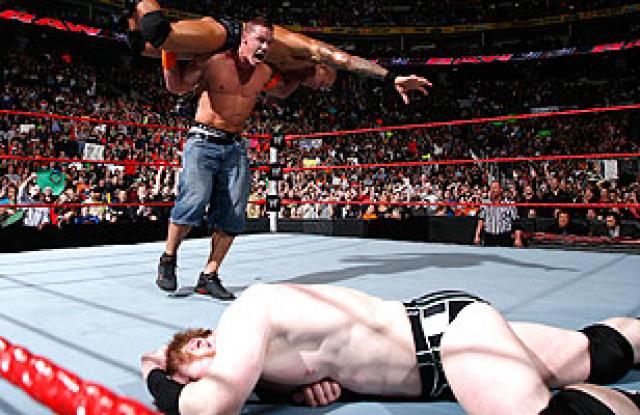 COLUMBUS, Ohio – After his co-star on USA
Network’s Psych, James Roday, was rushed to the hospital for an emergency
appendectomy, actor Dule Hill was forced to act as Raw’s sole guest host. No
worries, though, since Hill more than held his own with a little guidance from
John Cena, who just so happens to guest star on Psych’s season premiere this
Wednesday at 10/9 CT.


Beware of snake! That’s always sage advice when Randy Orton
is slithering around the ring. During the much-anticipated clash between WWE
Champion Sheamus and John Cena, The Viper nonetheless made his presence felt.
The Celtic Warrior and an intense Cena battered one another with fierce blows,
until Sheamus heaved his opponent over the ropes. As Cena lie outside the ring
in pain, The Viper struck. He slithered into the ring, snuck up on Sheamus and
dropped his Royal Rumble opponent with a wicked RKO, causing a
disqualification. As Orton savored the moment, he also nearly wrecked Cena, who
tried to re-enter the squared circle. Cena, however, exacted revenge on his
longtime foe when he turned the tables and administered a crushing Attitude
Adjustment. Will Cena ever have another long WWE Championship reign.

And then there were two. After taking the legs out from
under her opponent, Alicia Fox, in the Divas Championship Tournament, Gail Kim
advanced and will now battle Maryse for the Golden Butterfly. Unfortunately for
guest host Dule Hill, things didn’t work out nearly as well. After assuring
Alicia prior to the match that his psychic powers allowed him to see her
winning, Hill found himself on the receiving end of a bitter slap after the
bout. Oh, yes she did!

Carlito vs. Kelly Kelly ended in a No Contest

After a bit of mix up, compliments of special guest host
Dule Hill, Carlito found himself preparing to face Kelly Kelly. Instead,
Santino Marella insisted on taking her place, hoping to redeem himself after
watching the Best of Raw 2009 DVD, in which he embarrasses himself … a lot. As
the Italian Stallion made it to the ring, though, Jack Swagger charged and
proceeded to destroy him. You see, for the past two weeks, Swagger had issued
an “All-American American” Challenge, daring anyone on the roster to toss him
over the top rope. Well, first Santino obliged him in a shocking turn of events,
then the Italian enlisted Mark Henry to do the same. This week, however, it was
Santino who was left slack-jawed.

United States Champion The Miz should know by now, you mess
with MVP, The Franchise Playa is honor bound to mess back. That’s precisely
what went down when Miz battled Kofi Kingston in a non-title match after Kofi
was personally selected by special guest host Dule Hill for the task. As the
match drove on, Montel paid a visit, similar to the U.S. Champ’s interruption
during MVP’s earlier match against Big Show. This time, it was Miz who dropped
the bout to his opponent, Kofi.

They don’t come much more stubborn than Mr. McMahon. Not
only did The Chairman betray Bret Hart three weeks prior, he’s also been
refusing the Hall of Famer’s return to WWE. That didn’t sit well with various
Superstars, including World Heavyweight Champion The Undertaker and Triple H.
Now, add John Cena to the chorus. Cena confronted Mr. McMahon with some
forceful language that seemed to break through. In fact, a furious Chairman
stated that he would see Hart on Raw next week! Oh, and to punish Cena, he also
arranged a contest pitting him against WWE Champion Sheamus, although, frankly,
Cena appeared to relish the idea of a rematch.

If it were a beauty contest, ladies and gentlemen, it would
be nearly impossible to pick a winner. Maryse and Eve, however, were competing
in a much more ferocious affair: The right to advance in the Divas Championship
Tournament. Despite Eve’s best efforts, it was the conceited Canadian who
prevailed and now advances to the tourney finals, where she will face the winner
of the match between Alicia Fox and Gail Kim.

United States Champion The Miz grinned through
hyper-whitened teeth as he watched his new buddy, Big Show, prevail over his
rival MVP. Just as The Ballin’ Superstar prepared to tackle his redwood of an
opponent, Miz hovered ringside just enough to distract the No. 1 contender to
the United States Championship. The interruption proved enough to allow The
World’s Largest Athlete to chokeslam MVP for the win.

Last week, Triple H showed Shawn Michaels the ropes – quite
literally. In preparing for the Royal Rumble, The Game tossed his longtime
friend and Unified Tag Team Title partner over the top rope, making it
perfectly clear: It will be every man for himself this Sunday. Despite any
tensions, the DX duo know when to put aside personal issues and get down to
business, which is precisely what happened when they faced off against The
Legacy. Triple H & Michaels shut down any hope Cody Rhodes & Ted
DiBiase may have had of gaining momentum heading into Sunday.