I recently reviewed a link sent to me by a source  in the Netherlands connected with the AVID (aka: “the General Intelligence and Security Service of the Netherlands”). For those who don’t know the AVID is the premier spy agency in Europe.

The AVID  seeks to identify risks and threats as early as possible, before they become apparent.

This is done by conducting “in-depth investigations to gather intelligence material.”

Their reports, I have found, generally speaking are quite useful. Certainly well worth the time and effort to read them.

Those of course are just the ones “known” to the AVID. I suspect there are hundreds more. 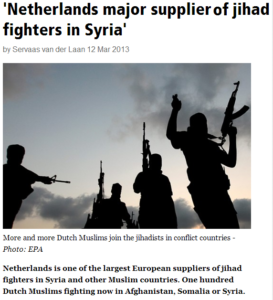 The relevant sections read as follows:

“Beginning of 2013, when within months more than 100 individuals traveled to Syria to join the fighting under the banner of violent jihad. This sudden tide of jihadist travelers surprised many; apparently jihadism in the Netherlands was more vibrant than generally assumed. A significant number of jihadists had been successfully mobilized to actually partake in violent jihad. An even larger number of individuals turned out to not only sympathize with their cause, but giving active support as well.”

“At present, it is estimated that Jihadism in the Netherlands has a few hundred potential participants and several thousand sympathisers. A small number has the intention to leave the Netherlands to participate in violent jihad (more than 130 individuals have already done so). A much larger group is actively involved in both online and offline transmitting of jihadist propaganda.

At a first glance the outbreak of the civil war in Syria may seem to have been the trigger for this sudden and rapid rise of jihadism in the Netherlands. Syria is easy to reach, and ideologically attractive to prospected jihadists. The conflict in Syria has become a focal point for the Dutch jihadist movement. But, however relevant the struggle for Syria has proven to be, it is only part of the story. The AIVD distinguishes four other developments that have played a role in the transformation of the jihadist movement in the Netherlands.”

Source:  Transformation of jihadism in the Netherlands  https://www.aivd.nl/english/publications-press/@3114/transformation/