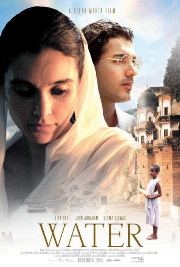 One film critique puts it this way: ‘Water’ belongs to that rare category of films that have the power to redefine the parameters of cinema. Well, I cannot agree more. It was absoultely true that Canadian-based Indian filmmaker Deepa Mehta’s Oscar-nominated ‘Water’ is one of the remarkably well-made movies of Indian cinema in recent times. This critically acclaimed piece of work by Mehta explores new heights in terms of quality filmmaking.

Based on the plight of widows who are forced to live in penitence after the death of their husbands, ‘Water’ is set against the backdrop of Mahathma Gandhi’s rise to power in colonial India in 1938. The movie talkes off when a shockingly young, eight-year-old widowed girl, Chuyia, (played by child artist, Sarala) is sent to a ‘widow house’ run by Madhumati (veteran actress Manorama), where women who have lost their husbands live a miserable life away from society.

The young widow, Chuyia, made a heart-felt impact among other widows who live in the ‘widow-house’ and her presence starts to affect the lives of other women, including the most beautiful widow in the widow orphanage, Kalyani (Lisa Ray). The movie takes a dramatic turn when Kalyani falls for a young lawyer, Narayan (John Abraham), who is an idealist follower of Gandhi.

When Narayan proposed marriage to Kalyani, she decide to go against all odds. Another twist in the plot comes along when Narayan learns a shocking truth that has shattered all his dreams of marrying Kalyani.

With its intimately profound and touching story, ‘Water’ tugs at your heart on several occasions. It leaves you emotionally bound to a shocking reality that explores one of the most shameful religious traditions in Indian culture. But what makes the most impact was the tragic climax, that will take you completely by suprize.

All I can say is that Deepa Mehta did an excellent job in handling the complex subject matter, giving it a top-notch treatment to bring the true essence. And the result is a magnificient piece of work, her finest till date.

‘Water’ has many other points to its credits including the wonderful cinematography that truly captures the era, the soothing background scores, convinving diaolgues and the great costumes which gives a sense of reality to the movie and the timeframe in which the movie was set. Although the movie trail on a slow pace, you will find no time to get bored as you will find yourself engrossed in the gripping tale as it unfolds.

And the performances depicted in the movie are just commendable. Every single charachter ranging from child artist, Sarala to veteran actress Manorama, not to mention the amazing performances by lead actors John Abraham and Lisa Ray, made a great impact. Sarala did a remarkable performance that will surely touch your heart. John Abraham played his charachter brilliantly, his best to date. Lisa Ray was superb portraying the charachter of Kalyani.

With its heart-tugging tale, top-notch performances, and great direction by Mehta, ‘Water’ is a must-watch for everyone.

Filed under: Music & Film
Share Tweet Pin G Plus Email
previous article: Does A Politician’s Eyes Look At Women?
next article: Beauty Is In The Eyes Of The Beholder