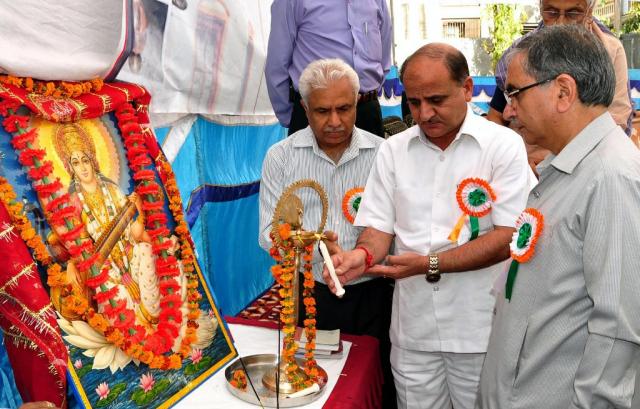 Jammu, April 11 (Scoop News) –Congratulating the people of state on Navreh, Deputy Chief Minister,  Tara Chand today hailed the role of  Kashmiri pundits in J&K polity  and asked them to come forward for playing greater role in socio economic development of the state.

Minister for Agriculture, Mr Ghulam Hassan Mir was the guest of honour in the function.

Dy Chief Minister said that coalition government are taking every step to implement the Prime Minister’s Rehabilitation programme in letter and spirit for making the congenial atmosphere for the resettlement of Kashmiri Pandits in their native habitations of Kashmir valley.

Saying that Kashmiri pandit are the intelligent community,  Dy. Chief Minister asked them  to mobilise their  human resources for  spreading quality education in the state as well as in the country.

Referring the demands of the community, Tara Chand said the power crises at Jagti colony had addressed by the government and orders in this regard has already been issued.

Speaking on the occasion, Minister for Agriculture, Mr Ghulam Hassan Mir said co-existence is key to live in gracious society and called upon the community to come forward with a brave heart to live again with the Muslim brothers in valley who are waiting your return anxiously in their native locations.

Asking them not think about the past, The Minister said that 1990 was a storm in valley which engulfs everyone and consumes lives of both the community. He said you have now a comfort life at Jammu and other parts of the country but the  majority  community still faces the wrath of violence as they have no choice but to face it bravely. He said it is they who for making every effort for making peace in the state.

Mr Mir said with full cooperation of people of valley particularly the youth, the situation of the valley has improved very much which is indicated by joining of young Kashmiri pandits in government jobs under Prime Minister’s Rehabilitation Programme and are performing their duties in far off villages in Kashmir joyfully. He said that now Kashmiri Pandit boys and girls and even their families are enjoying life with Muslim brothers smoothly.

The Minister called upon the community leaders to take a decision and come back to Kashmir and live with Muslim brothers as they live before 90’s as Kashmir is in complete without Kashmiri pandits.

Earlier, Kashmiri Pandit Sabha President, Mr K.K. Khosa gave brief about hundred years of existence of K.P. Sabha. The aim for establishment of the Sabha at Jammu was to preserve the Kashmiri ethos and culture of move employees during Maharaja’s period. He also emphasised the role of Sabha since 1990 and the contribution towards the displaced community particularly in the field of education. Mr Khosa reminded the temples and shrine bill should be passed at early as possible.

Filed under: Media & Tech, World
Share Tweet Pin G Plus Email
previous article: No One Ever Told You: Your #1 Job is to Manage Your Boss- Three steps to take control of your career
next article: Tree Plantation Campaign