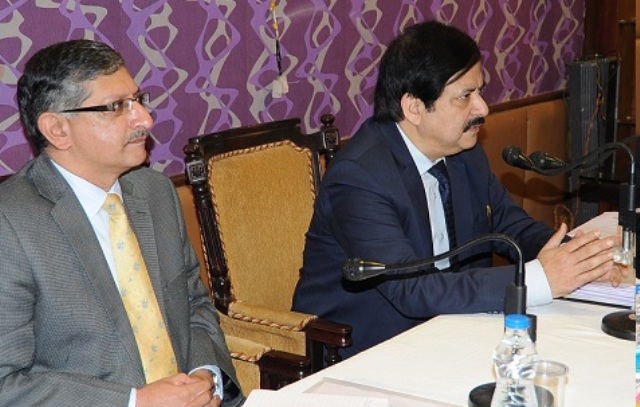 Jammu, November 13, (Scoop News)- Deputy Election Commissioner of India, Vinod Zutshi, who was on 2-day visit to Jammu to oversee the arrangements for the forthcoming assembly elections in the State, held marathon meeting with Chief Electoral Officer (CEO), J&K, Umang Narula, District Election Officers (DEOs), heads of security agencies and General Observers, here today.
Zutshi called for a well-knit strategy to hold free and fair elections across the State. He directed the concerned DEOs, SSPs and Observers to work with close coordination for achieving the desired results on ground. He stressed the need for putting in place all necessary arrangements related to the elections well in time. He issued specific instructions to the DEOs for distribution of photo identity polling slips to the voters, especially those who have lost their documents due to floods at-least one week before the polling dates.
Laying stress on ensuring the fool-proof security scenario during the election process, the Deputy Election Commissioner called for deployment of adequate forces to restore the confidence of people, especially in the sensitive and vulnerable areas. He also discussed the transportation of polling staff, EVMs and other election material in the most difficult and inaccessible areas and asked for utilizing the services of helicopters as per the requirements.
Replying to the issues relating to the Model Code of Conduct, the Dy. Election Commissioner said that Commission’s directives should be implemented in letter and spirit. On the issue of relief and rehabilitation to the displaced persons due to recent floods in the State, he said that the Commission has already given certain relaxations on the issue. He asked the DEOs and SSPs for regular media interactions on day-to-day election activities and arrangements for the smooth conduct of elections in their respective jurisdictions.
The Dy ECI expressed satisfaction on the preparedness in all the areas which are going to polls in first and second phases and asked the concerned to plug the gaps, if any, well before the notified dates.
The DEOs, SSPs of the districts which are going to polls in first and second phases and General Observers were present in the meeting.
Earlier, Zutshi along with Narula held separate meeting with ADGP (Nodal Officer for Elections), IGPs of CRPF, Kashmir, Jammu, IGPs of J&K Police of Kashmir and Jammu and took detailed brief on the security arrangements for the smooth conduct of elections across the State.