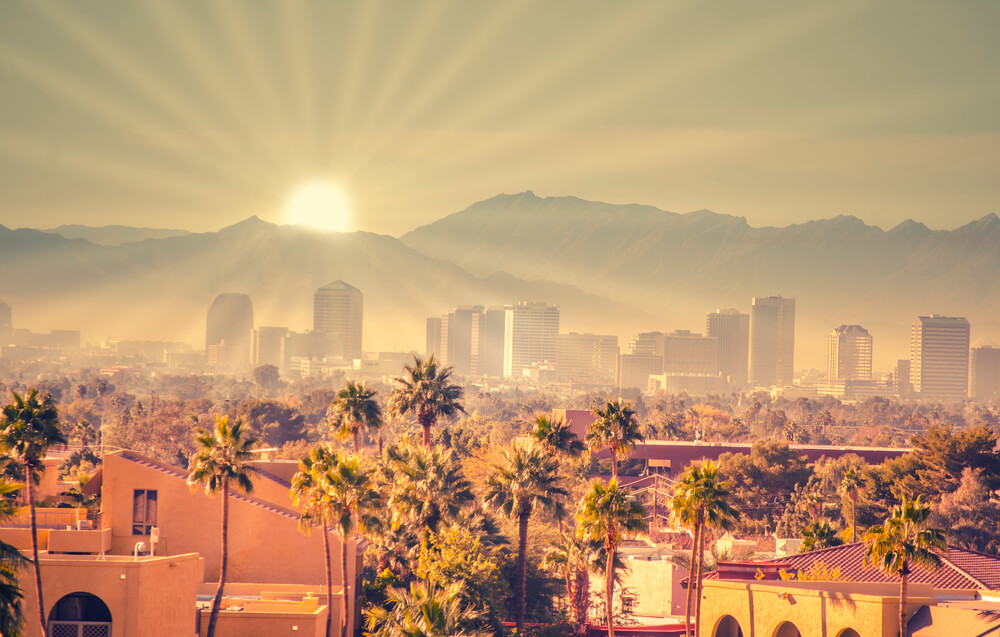 A common misperception is that Phoenix is a flat desert with cacti and palm trees as its only greenery.

That’s far from the truth; in fact, the two highest points in the Phoenix metropolitan area — also known as the Valley of the Sun — are close to the center of the city. At elevations of 2,600 feet and 2,700 feet, respectively, are Piestewa Peak and Camelback Mountain.

Smaller mountains can be found in other Phoenix neighborhoods, and a number of regional desert parks encircle the city.

All this mountainous variety to Phoenix means that the city offers excellent opportunities for exploring flora and fauna, and hiking enthusiasts will find a plethora of trails.

The rocky, steep summit trails to Piestewa and Camelback are the city’s most popular hikes. It’s always wise to be prepared for the hike so make sure you bring lots of water and a hiking stick or trekking poles when heading up the more arduous routes.

But sometimes an outdoor adventure calls for a less strenuous effort. It’s then that you want hiking trails that are still within the Phoenix metropolitan area but are more like nature walks and thus suitable for youngsters along with adults.

Late fall, winter and early spring are the best times for hiking, as long as it’s not raining.

March is an especially good month, as the temperatures aren’t ready to reach into the 90s and the abundant palo verde trees, mesquite trees, brittlebush shrubs and other flora on the trails are a colorful sight as they bloom for the season.

Four trails to get your desert boots dusty:

Just drive past the parking lot for Piestewa until you reach the end of the paved road, and the trailhead is there.

There’s easy climbing on a well-marked trail as well as small signs to tell you the kinds of cacti and shrubbery you are encountering.

The hike takes less than an hour. Access it from Lincoln Drive just east of State Route 51.

The massive McDowell Mountains that loom above north Scottsdale and its ritzy homes offer a number of retreats from the city hustle and bustle.

A neighborhood favorite is the Lost Dog Wash Trail, which is accessible from 124th Street and Shea Boulevard.

The trail gently climbs for under an hour to a viewpoint for Taliesin West, the desert home and studio of Frank Lloyd Wright.

A mecca for Phoenix mountain bikers as well as hikers, South Mountain Park is the largest municipal park in the country, stretching across 16,000 acres.

There are more than a dozen popular trails at the park, some of them extremely challenging.

For a family hike, try the Judith Tunell Accessible Trail, composed of two half-mile loops with a bit of elevation gain.

This recreation area in the east Valley boasts the Superstition Mountains as its backdrop.

The best bet is the Wind Cave Trail, which is a rewarding 1 1/2-mile hike up a granite trail to see where a large cave has been hollowed out at 2,800 feet.

Access the park from U.S. 60, taking the Ellsworth Road exit north and then turning east on Usery Park Road. There is a small entrance fee to the park.

There’s no excuse not get out and hit the trails around Phoenix when you get chance. The convenience and easy access from the city to the four trails above are one of the joys of life in Phoenix.