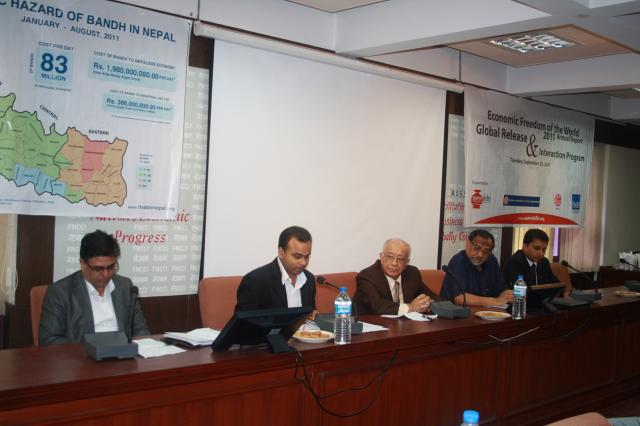 Kathmandu Nepal, September 20, 2011: Nepal Scores 129 position out of the 141 countries this year with a score of 5.50 in the Economic Freedom of the World Report listing Nepal in the least developed countries.The report was made public here by the Samriddhi, The Prosperity Foundation.

The report states Nepal continues to degrade in all the five measured areas of economic freedom which include: size of government; access to sound money; freedom to trade internationally; and Regulation of Credit, Labour, and Business and legal structure and security of property rights. Though its ranking and scores in some of the areas have improved, Nepal’s overall performance in terms of economic freedom continues to be low.
Economic freedom is measured in five different areas:

This year Zimbabwe maintains the lowest level of economic freedom among the 141 jurisdictions measured. Myanmar, Venezuela, Angola, and Democratic Republic of Congo round out the bottom five nations.

The annual Economic Freedom of the World report is produced by the Fraser Institute, Canada’s leading public policy think-tank, in cooperation with independent institutes in 80 nations and territories, including  Samriddhi, The Prosperity Foundation from Nepal.