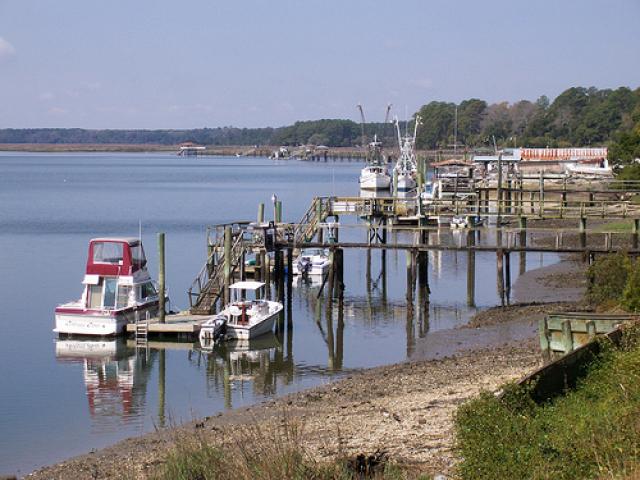 Bluffton, South Carolina is unique among most towns it size in the United States.

In the past, the town’s economy relied on either agriculture or from the shrimp and oysters in the nearby rivers and creeks that feed into the Atlantic Ocean. Because Bluffton is located between Beaufort and Hilton Head Island, the once small town has undergone many changes. Many of residents work in Hilton Head Island’s tourism industries such as food and beverage, hospitality, and recreation. Other residents either are stationed as Marines or work at Paris Island or the Marine Corp Air Station Beaufort.

Finally, other residents were dependent on construction that once boomed and forced Bluffton to grow from a one-square mile township to one of South Carolina’s largest municipalities by area. As Election Day approaches, issues on the minds of Bluffton voters are as diverse as the people who make up the community. The major issue in Bluffton, like all of America, is the economy.

If any vacationing Wall Street in Hilton Head Island had bothered to look at Bluffton, they may have seen warning signs of an impending economic collapse. Before last spring, Bluffton was still growing thanks to the sub-prime boom. Houses seemed grow up in the Bluffton area almost overnight. Newspapers carried stories of new portions of Bluffton undergoing development. Local banks advertised low interest mortgages. Mailboxes were full of flyers enticing people to sell their home. Many would sell homes then use the equity to purchase bigger homes.

Then almost at once, the buying stopped. A friend of mine who is a developer told me last April the housing market came to a sudden halt. One new development was using free gasoline for a year to entice people to buy new houses standing empty. As the economy worsened the toll on friends and neighbors became evident. One neighbor, a house designer, had to sell almost everything he owned to keep the bank from foreclosing. If the bank had foreclosed it is doubtful it would have sold the house, there are 6 houses already on the market within a quarter mile of this home. Many of these homes have been on the market on and off for years.

As I work and shop I can see other signs of a bad economy affecting Bluffton. I work in the local middle school as an Instructional Technology Coach. One of my duties is to assess new students to our school. During the school year last year hardly a week went by without 2 to 3 new students enrolled in our school. This year I have only tested five. We do this assessment before the new school year starts as well. Last year it took nearly a week to assess the new students entering school. This year it only took one day. The other day I was shopping at a local supermarket and selecting many store-brand products. I noticed a young mother with her son of about three years old. The boy wanted a brand of toilet paper with the “doggie” on it. His mother told her son that she could buy the most expensive brand as she reached for the cheapest brand on the shelf.

If you asked the average Bluffton resident in June what the major issue was for them they would have told you it was illegal immigration. Many businesses in Bluffton had Latinos on the payroll. Many of them worked in either construction or other low-wage jobs. Residents outraged over the seemingly never ending stream of Latinos coming to our area claimed they used public services such as education but do not support them by paying taxes. Other residents claimed illegal immigrants were breaking our laws. They pointed out many suspects arrested for a variety of crimes in our area had Hispanic names. In late May a Bluffton High School student was killed in a traffic accident when a Latino ran a red light and struck the teen returning home after his prom. The suspect fled the scene of the accident and when found shortly after by police was believed to be intoxicated. This incident became a hot button issue in a hotly contested Republican primary for a state senate seat in the area. While some still talk about illegal immigration, the economy has pushed it aside. Besides since construction went bust, many Latinos have left the area in hopes of finding work in other parts of the country or have returned to their native country.

The recent economic downturn has given many in Bluffton much to think about as they head to the polls to vote. Is the economy enough of an issue to Democrats a chance in a Republican stronghold? Probably not. While the Democrats have made some gains this year from young people and more African-Americans being energized by Senator Obama’s historic candidacy there has not been enough economic suffering for Bluffton to switch from solid red to blue.