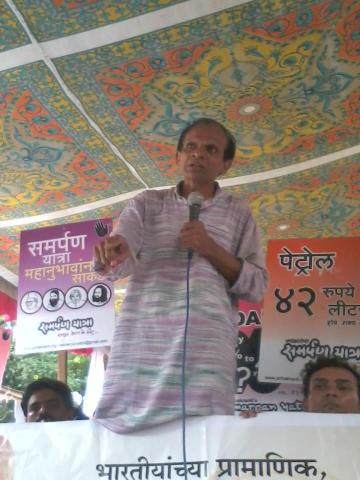 In a unique meeting of sorts, the reform seekers who want to change the economic scenario of the country met anti-corruption crusaders on Monday. The meeting involved discussions on ways to improve the nation’s social realities.

“It is very necessary to wipe out black money and corruption to help every Indian to live a dignified life,” said Anil Bokil, founder of the Arthakranti Pratishthan’s founder. Bokil was talking at the Balgandharva chowk in Pune, India after meeting the India Against Corruption (IAC) agitators there who are on fast since five days. These activists are part of veteran social worker Anna Hazare’s campaign to eradicate corruption and bring a regulatory body to oversee these cases.

The members of the Samarpan Yatra, which has been taken out to bring about various reforms in India’s economy sector, participated in IAC movement as a mark of their support when they reached Pune today. Bokil further added, “Along with the fight for Janlokpal Bill, it is also important to change the system and the five point economic agenda of Arthakranti promises to do so.”

The programme marked presence of several members from IAC as well several dignitaries from the city. Meanwhile, the team which reached Pune from Aurangabad, about 200 kms from the city, carried various activities at different parts in the city. They distributed pamphlets and performed street plays in these areas.

On Tuesday, the team will head to Ahmednagar and then lead its way to Ralegan Siddhi.

Meanwhile, another team from Bangalore team continued its stay at Mysore and carried several activities to spread awareness about the Arthakranti Proposals amongst the citizens. The team arranged a presentation at SBRR Mahajana First Grade College and garnered a positive response from students.