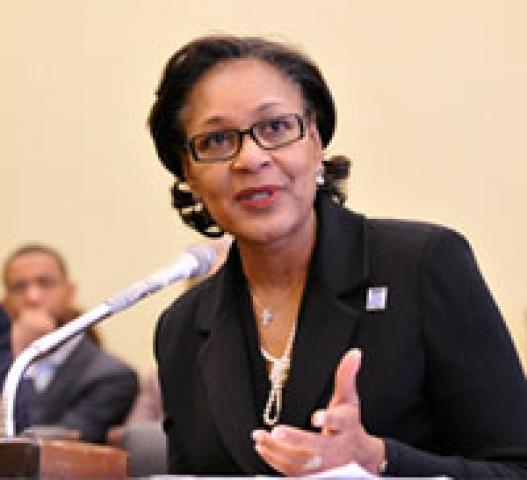 The Bush-Cheney administration’s first seven budgets have left a legacy of abuse and neglect when it comes to vital working families issues, key workplace initiatives and the important programs that make up the social and economic safety net. And the final Bush-Cheney budget proposal is no different, says AFL-CIO Executive Vice President Arlene Holt Baker.

“The Bush budget is dangerously unmindful of our shaky economy and the perilous hold by many working families in our nation’s middle class. It shortchanges the vital needs of America’s workers, while giving priority to special interests and an anti-worker political agenda.”

Testifying before the House Appropriations Subcommittee on Labor, Health and Human Services and Education, Holt Baker called on the subcommittee to reverse the Bush cuts to worker safety, job training, unemployment insurance (UI), Trade Adjustment Assistance (TAA) and other programs that fall under the panel’s jurisdiction. She also urged the subcommittee to block the move to increase funding for programs Bush’s Department of Labor has used to harass and persecute unions and union activists.

Overall, the Bush budget plan for fiscal year 2009 cuts nearly half a trillion dollars over the next five years from important domestic programs that help children, the elderly and sick, including $196 billion from Medicare and Medicaid. In addition, the Bush budget shifts more health care costs to the states and limits the eligibility of children who are covered by the State Children’s Health Insurance Program (SCHIP). It also slashes health care for the 9/11 first responders—thousands of whom are sick or disabled—by 77 percent, from $108 million to $25 million.

But one group is benefiting big time. Said Holt Baker:

The Bush FY 2009 budget preserves the expensive tax cuts for the wealthy.

Click here for an AFL-CIO analysis of the budget.

The House and Senate are expected to vote on the FY 2009 budget resolution in the next few weeks, and Bush’s proposal is likely to be defeated and several Democratic alternative are expect to be offered. For example, a proposal by the Congressional Progressive Caucus includes repeal of the Bush tax cuts for the nation’s wealthiest (the top1 percent), a crackdown on corporate welfare, a second economic stimulus package, a major initiative to create jobs and rebuild the nation’s infrastructure, and increased funding for Medicare, veterans’ health care, education and programs to protect fundamental workers’ rights.

Our nation’s workforce training programs are often the last resort for low-income and disadvantaged workers who have been neglected by their employers and the underfunded student financial aid system. These are the workers who will be hurt most by these cuts. The president’s continued cutting of job training funding and assistance for unemployed workers compounds the labor market problems working families have experienced since 2001 and worsens their economic anxiety.

The Bush budget not only cuts $685 million from UI and job-placement programs but also calls for elimination of the Employment Service that administers job referrals and UI and TAA benefits. Said Holt Baker:

The president’s plan will lead to the privatization and contracting out of vitally important employment security functions, thereby compromising control over and accountability for federal resources.

TAA is designed to assist workers who lose their jobs to unfair foreign competition, a problem that is only exacerbated by Bush trade policies. Bush has proposed modest TAA increases—while vowing to veto a House bill that makes improvements in the TAA program. Holt Baker told the subcommittee that Bush’s funding would still leave some 40,000 TAA-qualified workers without benefits.

harass, intimidate and persecute unions and union activists who seek to engage in the lawful pursuit of representative duties. Despite its cuts in programs protecting workers, the Bush administration continues to seek funding increases in its FY 2009 budget for programs that audit, investigate and prosecute unions.