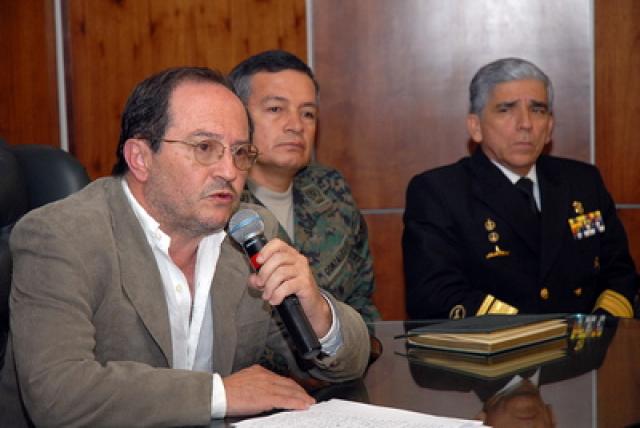 Ecuador is a relatively small country in the Latin American, but it has faced a lot of challenges since the begining of the 2008. The Armed Forces especially have been under the spotlight during this time, with assisting during the flood emergency throughout the country to the recent border dispute with Colombia. During the this crisis, the Ecuadoran people were told that the radar was not properly working, then they were told it was damaged and therefore, only added the uncertainty of those events and changed many people’s perception of the military.

These are only some of the inconsistencies being revealed in the press, and now the most recent controversy deals with a possible infiltration by the U.S.’ Central Intelligence Agency (CIA). The Commander-in-Chief and President Rafael Correa asserted that the national intelligency system had been inflitrated by the CIA and that there are illegitimate links between the secret service and foreign agencies. Some revelations have found that some Ecuadoran agencies had handed over information to the CIA following the attack by Colombian armed forces on FARC camps in Ecuadoran territory.

In fact, it also brought back memories of the work of Philip Agee, a former CIA agent who had worked in Ecuador, and subsequently left the Agency due to disagreements with the CIA’s tactics and mission. This has generated widespread discontent within the Armed Forces and National Police due to the statements made by their own commander. For those nationals, who have always felt honor and respect for the Armed Forces, the country is now experiencing a serious dramatic moments of shock.

Correa himself recognizes that he would be in hot water because of these public declarations. In BPLE [es], the author of this post collects some of the statements made by the president:

I am not going to allow it and if I have to fall because of it (the accustation), I fall. There are shameful cases in which the CIA financed certain units of Ecuadoran Intelligence, which reports were submitted directly to the CIA…

Somos Latinos [es] a platform of channels to publish content not only about Ecuador but South America, also covers the state of this situation, which saw the removal of many of the top-ranking leaders from both the military and police.

On Tuesday, in an unknown act, the entire military published an open letter demanding direct dialogue with the president. It was the drop that overflowed the glass. The response was immediate and, according to governmental sources, it is only begining. The minister of Defense was removed and the half of the military and the rest of the Armed Forces and police chiefs are hanging by a thread.

It is necessary then to take the word to the new minister of Defense Javier Ponce, who offered for the Ecuadoran Armed Forces to become more transparent, but hopefully this specific investigation does not focus only on the possible links with this organization but with those of other countries. Espionage on the Constituent Assembly and other persons should be investigated. That’s precisely what’s been promised by Ponce in a interview published by in the newspaper El Universo from Guayaquil. Aswering the question of what are the immediate changes within the security forces, Ponce said:

First of all, change the fact that not only the Ecuadoran public forces, but those of all of the continent, have been largely dependent on the United States. To be in technological possibilities of taking forward a policy of dissuasion, defense and protection of sovereignty…

All in all, Ecuadorans expect their president to explain in detail precisely what was the reason why he let go his officials in charge of the mainland security. He announced the changes from Mexico, from where he trasmitted his habitual radio address and anounced that he will explain more in detail on television.

Both large print media in Ecuador as La Hora [es] and political writers, such as Vladimiro Álvarez Grau columnist of Diario Hoy write and explain what’s going on with this scandal with a reserved prognosis. Another well linked and commented article related to this matter is a document written by Kintto Luccas who writes regularly for many press associations.