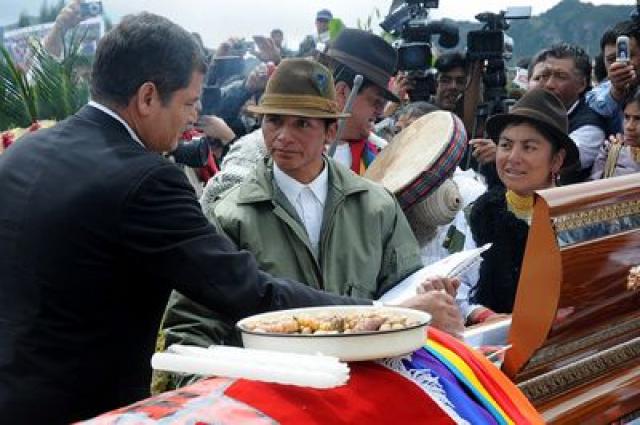 Indigenous communities, civil rights activists, and other Ecuadorians are mourning the passing of one of its social leaders, Rosa Elena Tránsito Amaguaña. As a “Creator of a new Ecuador,” she was one of the fundamental pillars of the Ecuadorian Indigenous Movement, alongside Dolores Cacuango [es], also known as Mama Dulu, and the writer Nela Martínez [es].

“Mama Tránsito” as she was also known, died on the special day in Ecuador, Mother’s Day. As a member of the Kichwa indigenous community, their belief is that she passed from the Pachamama (Mother Earth) to the Samay Pacha (Spiritual World) and that death should not bring sadness, but rather a joyful and colorful celebration. Mama Tránsito is said to be lived almost a century but as usually happens with some Ecuadorians families, her biography says she was born on 1909, but she maintained that she was born six years earlier.

Ecuadorian bloggers are saddened by her passing and commemorate the legacy Mama Tránsito has left to the contemporary Ecuadorian indigenous movement. Vamos a Cambiar el Mundo [es] republishes an article written by Silvia Cuevas-Morales. The article recounts Mama Tránsito’s childhood in Huasipungo and how her mother wanted her to attend school so that she would not be illiterate. However, she soon had to work as a domestic employee for the hacienda owners.

The poor treatment and inequality that she witnessed firsthand motivated her to become involved fighting for the rights of indigenous communities. As a result, she became heavily involved with unions and she helped establish the first agrarian syndicates in Ecuador. In addition, she was a founding member of Ecuadorian Indians Federation (FEI) and the first Ecuadorian bilingual schools. During her visits to Cuba, she learned to read and write during a time when education for the indigenous was prohibited at the time. As a member of the Communist party, Mama Tránsito is remembered as a ‘comrade’ and the blog of the Communist Youth of Ecuador [es] honors her life’s work because the indigenous sectors were opressed and expoited and how they “did not make decisions over their own lives like work animals.” They are also hopeful and write:

We are all sure that like “Mama Tránsito” that “the day will come that the indigenous, blacks, whites, mixed race, mestizos will all eat from the same plate.”

She was an inspiration to many, and university student Nati Wolf of La Chica de la Luna [es] chose Mama Tránsito for her class assignment about a person of history. With her classmates, Wolf visited the community of La Chimba to meet her in person. This blogger writes about what she calls the ‘other side’ of Tránsito Amaguaña and the conditions she saw in which the indigenous leader lived. Wolf stresses that even with relative progress that many of Tránsito’s concerns remain unsolved:

Her teary eyes were tired, her wrinkles and thick veins as a result of expressing a lifetime of experience and struggle, they make me see that there is still a long way to go, even though she has achieved some stability in several areas. Poverty still exists, discrimination is a daily concern, and every second of our lives, our rights are still violated.

I am sure that she had a great impact on the lives of those who met her. Destiny called for us to have met before she left this earth. She gave us the seed of perserveance and courage with which one should keep fighting. We know that when we are united that many things can be accomplished..

For photos of Wolf’s visit, please visit her Flickr page.

There are two videos (I & II) in YouTube that help us understand better the life of Transito Amaguaña. El Universo [es] also has a photo gallery with pictures.

This article was originally published on Global Voices Online.