Ed Roman and Jiggley Jones have made the Top 100 of No Depression’s Best Albums of 2014 Reader’s Poll. Ed Roman’s Letters From High Latitudes (#75, MTS Records) and Jiggley Jones’ …A Mountain, a Struggle, a Tunnel, a Light…(#78, Lamon Records Nashville) bookended releases from John Mellencamp (#76, Plain Spoken) and Miranda Lambert(#77, Platinum.) They also ranked higher than Top 100 releases by Neil Young, Johnny Cash, and Blackberry Smoke. This is the first appearance on the prestigious list for both Roman and Jones. 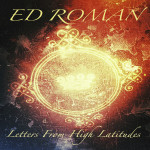 No Depression has been the Roots Music Authority since 1995. More than 3,000 album votes were submitted by No Depression readers, during December, with more than 580 albums receiving votes. The number one album named in the poll was Metamodern Sounds in Country Music by Sturgill Simpson. Other MTS artists making the list were Bradford Loomis and Beth Whitney (#110, The Banner Days) and Hicks (#209, Rock ‘n’ Roll Cowboy.)  View the entire ranked top albums list at http://nodepression.com/top-albums.

“We’re ecstatic for both Ed and Jiggley,” said Michael Stover of MTS. “Both of these guys put out amazing records this year, and it’s so gratifying to see them receive the acknowledgment from the public and readers of No Depression. I have a feeling you’ll be seeing a lot more of them on the site in the future.  Also, congrats to Bradford and Beth, as well as Hicks.  All of these artists are so hard-working, and I’m just so proud to be associated with all of them.  Thank you to the readers of No Depression for recognizing our artists.”

Jiggley Jones is a Coatesville, PA-based Americana singer/songwriter.  Signed with Lamon Records Nashville, Jiggley has received international press and airplay for his music, charting on the itunes, New Music Weekly and Roots Music Report charts, among others.  He is a 2013 and 2014 International Music and Entertainment Association Award Winner, an Independent Country Music Association Nominee, a two-time New Music Awards Nominee, and a 2014 Artists Music Guild Heritage Awards Nominee. For more information, visit http://www.jiggleyjones.com.