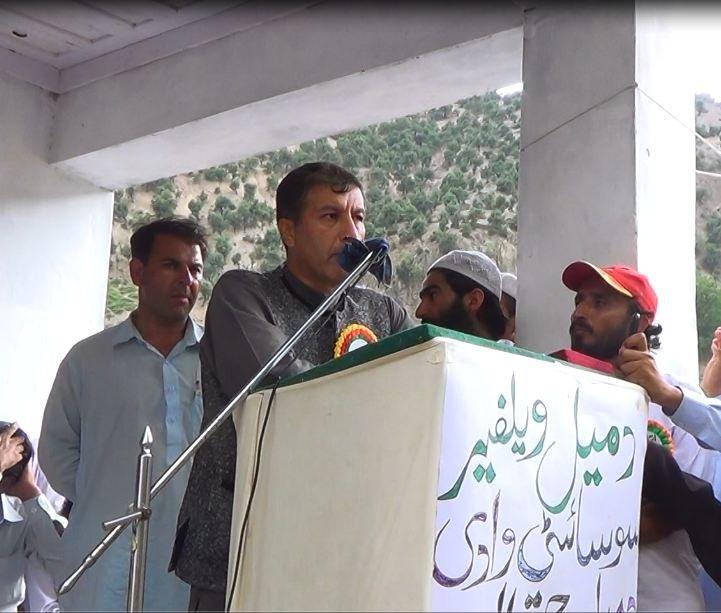 Educational Conference held in Damel Valley By: Gul Hamaad Farooqi CHITRAL: A one-day educational conference held here in Damel valley which was attended by politician, social workers, educationist, students and a great of general public. MNA Chitral, Prince Iftikhar Uddin was Chief Guest on the occasion , Haji Sultan, the provincial leader of PTI, presided over the conference. The conference was organized by Damel Welfare Society, headed by Asmat Chitrali, in the Government high School Damel. Addressing to the education conference Alhaj Khursheed Ali Khan Chairman, the ex-chairman of District council; Asmat Dameli, the chairman of Damel Welfare Society; Ashraf Uddin, Principal High School Damel; Sultan Khan, Chairman Zakat Committee, Fakhruddin Akhunzada, Executive Director FLI Islamabad; Naseem Haider, member Anjuman-e-Taraqi Palula; Qazi Israr, ex-councillor, Asfandiyar, Chairman Young Star Welfare Association and teachers of the area. They highlighted importance of education and stressed upon the Damil people to must sent their children including daughters to school because education is the only way of development. They said that due to illiteracy, ignorance and uneducated environment people of the valley mostly involve in different social evils and every person having rifle instead of a pen. MNA Chitral said that Chitral is among the top ten districts of Khyber Pukhtoonkhwa where literacy rate is high but the literacy rate in the southern Chitral is very low. He promised to play his role to address the issue. Tehsil Arandu, where this conference was held is homeland of multi-ethnic groups, seven language communities live in the area. One of the issues is that non-local teachers do not understand the language of students which negatively affects the learning process of students. The conference was fist of its kind which provided opportunity to discuss the educational issue of the area as well as it created awareness regarding education. People of the area and politicians first time openly discuss the issues. At end of the conference shields were distributed among the student and teacher for their best performance. A large number of people and student attended the conference G.H. Farooqi C/O Manager bank Islami Main branch Chitral phone No 0943-320737, 0943-316052, 0943-414418 , 03025989602, 03337069572, 03159698446, 03469002167