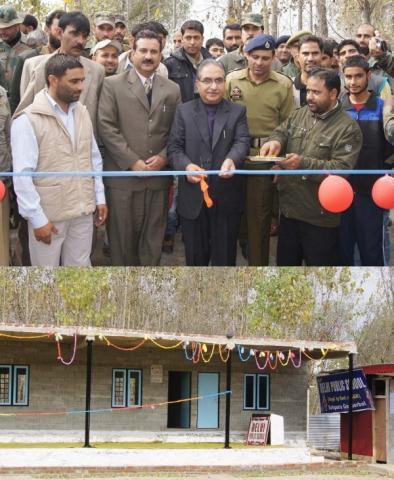 , November 01 (Scoop News) – Saying that education is basic pillar for the development, Minister for Agriculture . Ghulam Hassan Mir Tuesday called upon the young generation to attain quality education as it is the only way to make J&K prosperous.

The Minister was addressing a public meeting after inauguration of at Sehipora, Ganderbal here this morning. He said that during prolonged unrest in the valley, the education has become the first causality of the turmoil. He said that in this direction the present coalition and central government have given first priority for its expansion under the programme hundreds of primary, middle, high schools, high secondary schools have been opened across the state including far off areas.  Similarly colleges, university campus have been setup to provide education facilities to the students at their door step.

The Minister said that, if our youth want to compete at national and global level in any forum, the education is pre-requisite for achieving the goal and it helps us to prove our ability across the globe in today’s competitive era.

For providing quality education to young generation,  Mir said that in this direction the private sector would play an important role and asked the investors to invest this sector in a big way. He said that people are now coming forward to invest in the sector which is a positive trend and hoped it would help our future generation in big way.

Appreciating the management body of the school, the Minister asked them to assure the quality education to the students as the parents of the village has reposed the trust on you.

Speaking on the occasion, Deputy Commissioner Ganderbal, . Showkat Ahmad Mir hailed the efforts of management body and announced a culvert over the irrigation khul for connection the local play field with the school premises. He said that the funds would be released under untied grants of the district.

Brig. 3-Sector . Neeraj Seth said that providing quality education facility to our future generation would help them for nourishing their hidden talent for nation building. He said that Army is always are fore front in providing co-curricular facilities to the youth of the State and assured the local population that 5-RR would provide computer facilities to the new inaugurated school.

President, Managing Body of the public school, . Farooq Ganderbali said that every step would be taken to provide all the facilities to the students available in reputed and well managed schools of the Valley.