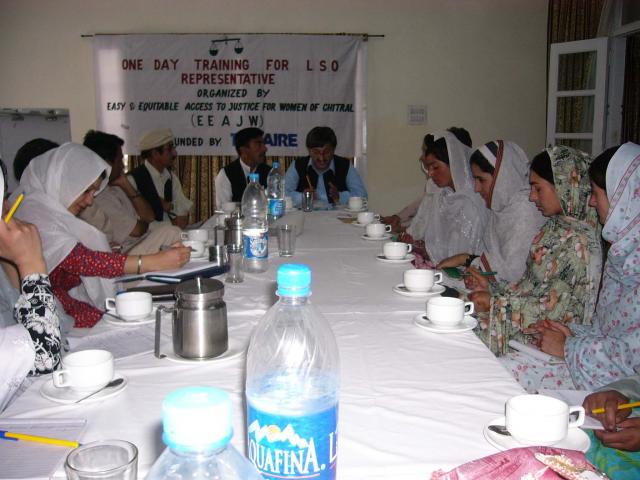 CHITRAL: A one day   sensitization training workshop on Women rights for representatives of Local Support Organizations (LSO) was held here in a local hotel at Booni some75 KM from here. The program was organized by Easy & Equitable Access to Justice Program for women of Chitral (EEAJP) a project of Legal Aid Forum for Human rights(LAFH) funded by TROCAIRE (Ireland). Niaz Ali Shah Project coordinator briefed the participants regarding aim and objectives of the organization. He said that LAFH work free of cost for needy, helpless, oppressed and aggrieved people especially women folk of Chitral and want to come forward by empowering them. He said some 230 cases of poor women were trialed in different courts of Chitral free of cost. Similarly for creating of awareness among the general public and women folk we conducted 20 seminars in different parts of Chitral. He said we also reflect their problems through different media if not solved at local level. He said EEAJP arranged workshops, trainings, seminars for media professionals, lawyers and head of line departments on women and human rights.

Representatives of different LSOs from the area also participated in open discussion on women rights violation, its reasons, and possible solutions. They said that women are facing numerous problems in this male dominating society. The participants stressed upon for framing strategy and mechanism for protection of women,s rights. They said that women are also an important component of our society and we never can ignore their importance nor their rights. The speakers said that mostly the daughters are ignoring by some parents by discriminating in their educational institutions, their food and dresses. Miss Shakira said that women should to be encouraged for participating in developmental activities. She said that they have one Citizen Community board with the name of 3 star women CCB who opened first lady shop at Chitral and following them 41 more shops and lady shopping centers opened in Chitral. Miss Laila said that women often having lack of knowledge and awareness and that are why they can easily be trapped.

The speakers said that Islam has bestowed real status and real rights to women as comparative to other religious. The speakers expressed their great concern over that usually we know our rights but never our duty. Feedback was also taken by the participants on reservations, comments on solving women rights. They said that women folk should to be came forward for development of the country without any violation of cultural values. Ghulam Ali Shah Advocate resource persons of Free Legal Aid Center Booni on behalf of EEAJP highlighted women and human rights on legal point of view. He said that women are entitled to live at their own choice availing their civics, politically and religiously rights and to marry with their own will. He said that women are also entitled in property and heirs of their parents and their rights never be violated. They stressed upon to must educate their female and never deprive them from their fundamental rights. The speakers lamented marrying of young girls with old men in down districts and demanded to be discourage this practice. They also debates on increasing number of women suicide due to frustration and depriving them from basic rights. A large number of social workers, representatives of several Local support Organizations especially female, lawyers and people belongings to all walk of life participated the workshop.