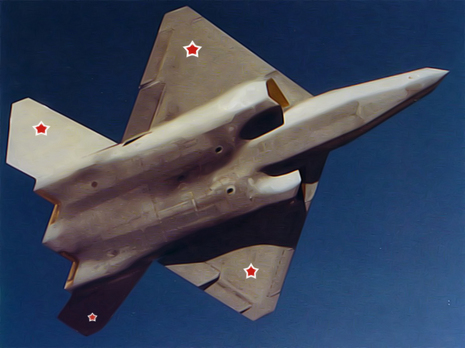 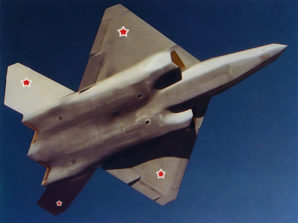 Rare picture of a for 5th-generation Fighter jet tested by Russia. The Sukhoi T-50 prototype will challenge the US F-22 Raptor. The specifications and design of Russia’s new fighter have been shrouded in secrecy. Even the costs are secret but the Russians claim to be able to build such planes at about 2.5 percent less than the cost of a US F-22. Russian news agencies reported the plane has a 5,500-kilometer (3,400-mile) range. And travel at a distance of 2.4 times the speed of sound. Officials have  indicated that the T-50 will enter service in early 2015. By all indications Russia will meet or achieve ahead of that target date by several months.

“Mr Kuyvashev said that the highest growth is in aircraft manufacturing sector. He added that the program to develop defense industry companies is also being implemented with quite successful results, he informed Putin

Mr Kuyvashev noted that the region will launch next year a program, Urals Engineering School, with a particular focus on raising specialists’ qualifications.

The program involves opening ongoing education resource centers and training centers. The program will also work with students and schoolchildren.”

Note: Russian defense industry reform centers around costs savings and optimization. It is a critical reform effort of the Putin’s policy of modernizing and improving the Russian military.

Russia feels it needs a strong and modernized defense industry to carry out its ambitious state rearmament program until 2020.

In part to meet the global threat posed by the United States military.

The government of the Russian Federation plans to allocate 20 trillion rubles ($641 billion) for this program.

In addition, Russia is the world’s second largest conventional arms exporter after the United States.

In 2010, Russian defense industry companies delivered about $10 billion worth of arms to foreign customers.

Filed under: Military, News
Share Tweet Pin G Plus Email
previous article: How to Control Costs and Make Your Business Profitable
next article: “West Point graduates, continued to put their lives on the line. To preserve not just American security, but the security of the entire Euro-Atlantic region”, Rasmussen tells cadets