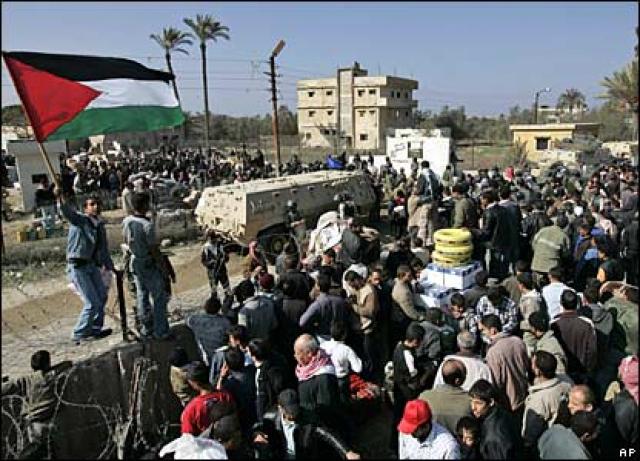 Since the destruction of the border security fence separating Gaza from Egypt the Egyptian President Hosni Mubarak has been exercising quite a bit of restraint. This is due in large part to a sympathetic outlook concerning the plight of the Palestinian people. However, Mubarak must find a way to contain and control the flood of Palestinians coming through his border and it is becoming an issue of safety and security for the Egyptian people.

It was believed that as the people came across the border and purchased the goods that they needed, the swarm of Palestinians would become lessened. Nevertheless, this is not the case, the border town stores are being overwhelmed, and the border itself is in chaos. Egyptian Prime Minister, Ahmed Aboul Gheit has stated, “That he will show restraint, but not at the cost of Egyptian lives.” This statement follows the injuries of several Egyptian security forces that were charged with the job of controlling the border.

The core of the issue seems to be Hamas itself. Egypt, as well as any other Nation in the region, knows Hamas to be a militant force. This indeed is troublesome to any sovereign Nation and it must be controlled at the outset, or it could lead to larger problems in the future. It is believed that Hamas was responsible for the explosions that destroyed the border security fence in the first place and in any other situation; this would have been considered an act of war.

Nevertheless, Egyptian officials have decided to treat this as a humanitarian effort to alleviate the suffering of the Palestinian people. However, it is only a matter of time until Egypt will have to consider what the effects a long-term breach of their border will mean.

Filed under: Opinion, World
Share Tweet Pin G Plus Email
previous article: Can the government save democracy and journalism in one go?
next article: Ullalim Cultural Festival