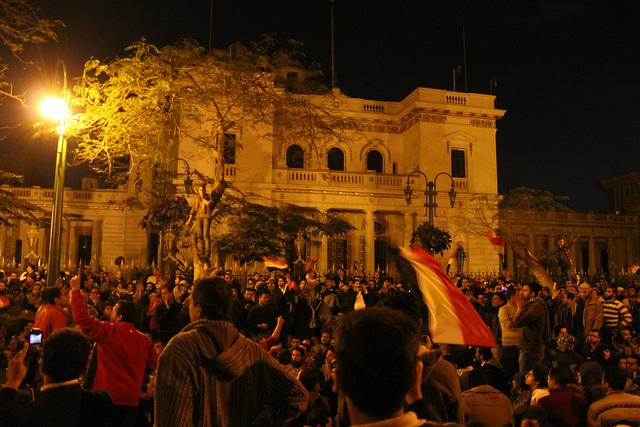 There was a time when Western intervention in world affairs was a reviled concept, but alleged Western ‘reluctance’ to intervene to oust Mubarak from Egypt and the Egyptian army’s chosen manner of restoring order shows that events are changing that perception.

The result of this will (ironically?) be that the role of western diplomacy – and that of the United States in particular – will be reinforced, particularly if the uprisings in Tunisia and Egypt are repeated elsewhere.

Who would ever have believed it? There used to be a time when if anyone had been foolish enough to say "I think the West should intervene in {such and such a country}" the world and its dog would have hounded them out of town with the epithets "fascist!" and "Bush lover!" to accompany him. Those were the days when the words "Western intervention" were a synonym for ‘imperialism’ and they would be spat out onto the ground to be crushed like a poisoned beetle into the dust.

But all that has changed in the blink of an Egyptian revolt against the Mubarak regime.

The size and revolutionary fervor of the crowds which poured into Cairo’s Tahrir Square took the authorities completely by surprise and the ensuing confusion resulted in a considerable number of deaths, many of which were said to be the responsibility of the Egyptian police.

They had been ordered to deal with the situation by a panicked Mubarak and events then quickly got out of hand, and the world’s leaders were just as confused by what was happening as were the Egyptians themselves.

The result was that the West played a pragmatic wait-and-see game, and it was this which led to the first wave of calls for the West to come down firmly on the side of the revolution – in other words, for it to intervene in the affairs of a foreign country, and this wasn’t any old country, it was the largest Muslim nation on earth. The press, opposition parties and – most tellingly – the revolution’s leaders themselves, conspued the West for its silence.

It was an impressive display of self-righteous lesson-giving.
The United States was of course, the first country to find itself pressed to intervene, and the general idea was that Obama should ditch Mubarak and support the revolution. That he should decide to wait and see which way the wind was blowing before jumping however resulted in the headline ‘another day, another two US policies’ in The Guardian, which also claimed that the "dithering" White House was "all at sea". It was much the same thing in America, with many but not all (Fox News, the Washington Times etc) editorials advising him to go with the flow.

British daily The Telegraph was next to chime in (albeit in a mealy-mouthed manner) and it duly approved Prime Minister David Cameron’s shift towards getting rid of Mubarak.

And then there was Europe, with EU diplomatic head Catherine Ashton being – rather unfairly I thought given that the EU can’t even agree on the tech spec of traffic lights never mind world affairs – criticized by all and sundry for her "indecision." (This is doubly unfair on Ashton because at the same time her biggest critics, France, Poland and Germany, were busy berating her, those countries’ leaders were being criticized for exactly the same reasons in their own countries, but that’s EU politics for you.)

Since then, Mubarak has been forced out of power and the country is now effectively being run by the army, the same army which was being hailed a week ago by the revolution, which praised its restrained behavior and its apparent sympathy for the cause of the people. But that situation did not last.

Sunday saw the army trying to clear Tahrir Square of protestors in order to get traffic moving again in what is a crucial artery of Cairo’s economic life, an economic life which is almost dead on its feet as a result of the revolution. The army also dissolved parliament and suspended the constitution.

These events have been welcomed on the whole by the leaders of the revolt, but mutterings about the army confiscating the revolution are already surfacing, particularly concerning an army announcement that continued disruption in the country will not be tolerated.

More tellingly however, the West and America are on the brink yet again of being exhorted to flex their muscles, this time to rein in any possible attempt by the army to deny the people of Egypt the kind of democracy they seem to be demanding. Western – and particularly US – responses to the current situation are said to be crucial to its outcome.

If the Egyptian army does not handle near-future events in a manner likely to satisfy the revolt, demands that the West call it to order – with threats to military aid support if necessary – shall inevitably surface.

In other words, Egypt’s revolution still needs western influence to help it to get where it wants to go. And the same would be true for any other revolution in any other Arab country.

Make no mistake, western intervention is suddenly fashionable and acceptable again. For better or for worse.

Filed under: Opinion, World
Share Tweet Pin G Plus Email
previous article: Border War: Counterinsurgency needed at US-Mexico border, says lawmaker
next article: Is It A Cold Or The Flu?