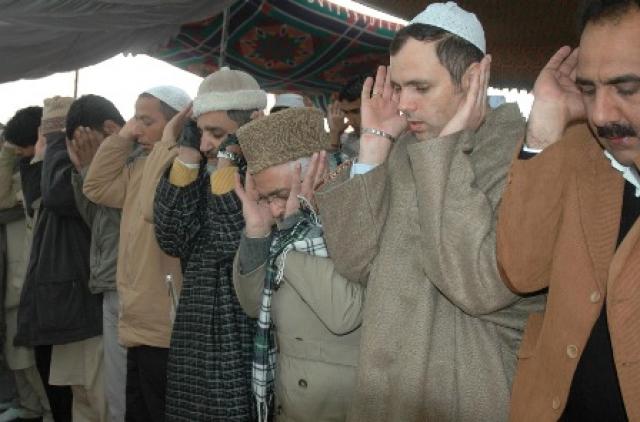 Srinagar/Jammu, November 28 (Vijay Kumar) – Eid-ul-Azha was celebrated with religious fervor and enthusiasm in various parts of the Jammu & Kashmir today. Chief Minister Omar Abdullah celebrated Eid-ul-Azha today with the people at both and , exchanging wishes and spending moments of joy with them.

The Chief Minister received scores of people at his Srinagar Gupkar residence in the forenoon who visited Chief Minister’s house to great him on the occasion. Among the large number of visitors were Ministers, Legislators, Corporators, prominent citizens, officers, media persons, Advocates and large number of public including political activists and social workers. The number of youth was conspicuous who while greeting the Chief Minister assured their wholehearted support to him in his endeavours to lead the State towards goal of peace and prosperity.

Omar in the afternoon flew to the winter capital and received public at his Wazrat road residence till night hours. The people from various parts of and outskirts thronged the residence of Chief Minister and greeted him with Eid Mubarak. The visitors here also included Ministers, Legislators, Corporators, Chief Secretary, Advocate General, officers, prominent citizens, media persons, Advocates, political workers and people from other walks of life.

Meanwhile, Eid-ul-Azha was celebrated across the State in an atmosphere of traditional brotherhood, love and amity. The non-Muslims greeted their Muslim brethren and exchanged wishes.

At Eidgah Jammu, the Minister for Education, Peerzada Mohammad Sayeed offered the Eid Nimaz and greeted the people.

In , the main congregation was held at the historic Eidgah here where thousands of Muslims offered prayers.

Minister for School Education, Peerzada Mohammad Sayed, was among the people who offered the Eid Nimaz in the Eidgah. He greeted the people on the occasion and prayed for peace and tranquility in the country and the State.

At the Eidgah, people belonging to various communities greeted their Muslim brethren. Scenes of amity and brotherhood were galore, as the non-Muslims were seen hugging their Muslim brethren with love and affection.  Prominent among those present at the Eidgah were the former Deputy Chief Minister,  Mangat Ram Sharma and former Minister and MLC,  Ajay Sadhotra.

EId prayers were also offered at Jamia Masjid at Khatikan Talab, Ustad Mohalla, Janipura, Peer Baba, . Reports of Eid prayers are pouring in from various other parts of the division.