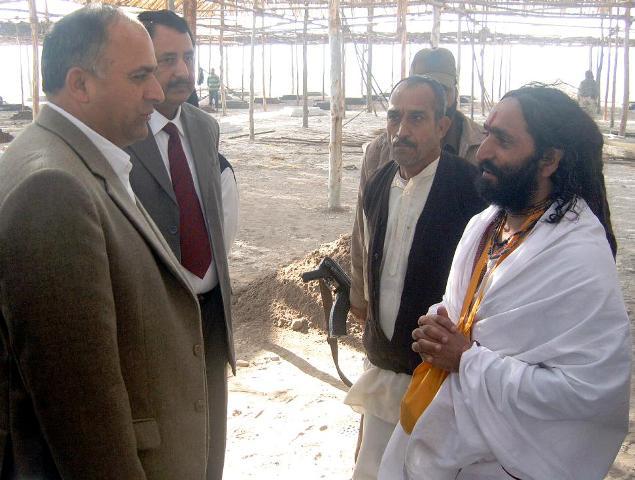 , November 22  (Scoop News) –  The 11-day   Vaishno Maha Yagya being organized by Sant Sri Balak Yogeshwar Dass Ji in the memory of Amar Shaheeds   and for the peace and prosperity of the country is commencing from November 25, 2010 at the riverbed of revered Tawi near Panjtarthi, .

Lakhs of people from within and outside the state, besides religious leaders and Mahants are expected to participate in the upcoming congregation.

The Minister of State for Power and Consumer Affairs &Public Distribution,  Shabir Ahmad Khan, today visited the venue of Maha Vishno Yagya and took stock of the arrangements made by various departments for the smooth conduct of the congregation and convenience of the visiting devotees.

The Minister told the organizers that elaborate arrangements are being made to facilitate smooth and hassle free conduct of the congregation. He said that uninterrupted power supply would be provided during Yagya days adding that the concerned authorities have been directed to ensure all basic amenities like power, drinking water supply, proper sanitation, besides leveling of venue and repairs and renovation of approach road including provision for temporary foot bridge over the river before commencing of the Yagya.

The Minister said that 200 electric poles and a 400 KV transformer with transmission and distribution lines are being installed at the venue of the Yagya to ensure round the clock power supply during the Yagya days. He instructed Chief Engineer, M&RE, ,  Muhammad Qasim to ensure the completion of all electric works at the venue before commencing of the Yagya so that the visiting devotees shall not face any difficulty.

The Minister hailed Sant Sri Balak Yogeshwar Das Ji for the endeavours he is making to bring the people of the nation close to each other by organizing such peace congregations. He said that holding of such socio-religious events go a long way in strengthening the bonds of brotherhood and amity among the masses.

Apprising about the congregation schedule, Sant Sri Balak Yogeshwar Das Ji told the Minister that the Yagya is being organized as a mark of respect for the martyrs of the nation and for the peace and prosperity of the country. He apprised the Minister that 65 families of the national heroes from across the country have been invited to participate in the Yagya. He said that the Yagya will be open for people of all communities as the main objective behind holding this mega congregation is to pray for world peace and prosperity in general and for in particular.