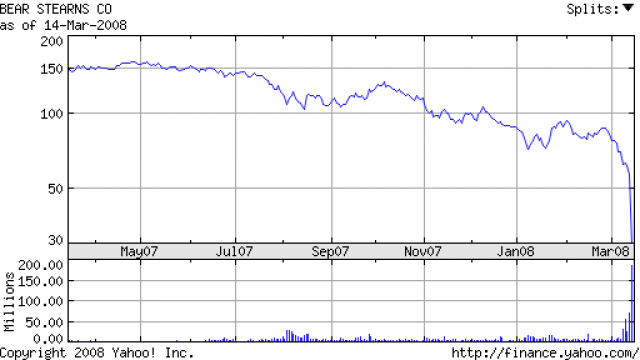 It’s been a tough week in New York. First, Eliot Spitzer goes down and then Bear Stearns is dealt a Yarborough.

The shock waves from Emperor Club VIP-gate could be felt in every middle class household. College educated housewives were deducting that if Eliot could cheat, then their favorite gentleman must also be clubbing.  As evening newscasters reveled in the sordid details, the same feint and parry echoed throughout the City, “I have to go to bed now, honey, I have an early meeting ”. “I’ll be up in a minute, dear.” But only when his snoring was audible would she tiptoe to the matrimonial bed.
So, no one got any conjugal attention in New York this week and the effects could be felt in every walk on life. I couldn’t get a meeting with my banker friends because they were either testifying to Congress about their compensation or unavailable dealing with a ‘private family matter’.  I can only surmise that their wives were doing a better job than Congress of getting down to the heart of matter. Whereas the congressmen forgot to ask the obvious questions like “Mr. X, how do you know Mr. Y, and, as his best friend, are you really qualified to also determine his executive pay?” or even more risqué  “Weren’t some of those profits before 2007 due to illusionary subprime profits and therefore you should return that portion of your nine-figure bonus”. But then again, we were dealing with weakling Congressmen, not the most dangerous of all creatures, a housewife cuckolded.
I can imagine my banker friends trying to explain to their wives that the $9,999 that they had transferred to ‘SIV Caymens’ was not what it looked like, but a legitimate mechanism for hiding risky behavior.
I also tried to reach my lawyers, but they too were mysteriously indisposed.  Some say that they were all being treated for depression having found out that their hourly rates were only a fraction of a ‘five-diamond’ escort.
By the end of the week, the crisis of trust had rippled through to markets. The dollar was in free fall. Carlyle, KKR and Blackstone had all disappointed. Gold jewelry was the only store of value.
As the pundits remarked, this was a crisis of trust. If you can’t trust a prosecutor who just passed a law making it a crime punishable by up to one year in jail for frequenting a prostitute to control his ‘animal spirits’, then how can anyone trust a counterparty as irrational as the market or the Federal Reserve, for that matter — surely not Bear Stearns, the firm that practically invented subprime securitization.
Going into this weekend, we can only hope that New Amsterdam has finally hit rock bottom for this credit cycle and the long arduous task of rebuilding ‘honor amongst thieves’ has begun. The email threads this morning certianly pointed in that direction. They were dominated by comments like, ‘that PARTICULAR girl ain’t worth it”, so the American public need not be fearful that Spitzer’s fall will teach Wall Street anything at all.
Filed under: Opinion, Politics
Share Tweet Pin G Plus Email
previous article: KUMPULAN RANGKUMAN PERISTIWA DARI TAHUN 1999 SD 2002
next article: 2008 WWE Royal Rumble Review