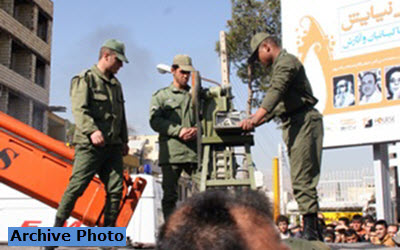 On Tuesday (10 May 2016) a human rights activist pointed out that ‘in the past two weeks the [Iran] regime has carried out numerous medieval punishments.’

Ms. Farideh Karimi is also a chairwoman of the NGO . Pointing out the barbarity of the “flogging [of] a woman on April 27 in Golpayegan,” but also the heinous “approving [of] a sentence to blind a man with acid.”

This increased spike in brutal punishment comes at a time when ‘Iran’s prisons have surpassed their capacity.’ Brig. Gen. Hossein Ashtari has addressed his comments to the clerical regime’s newly installed Majlis (parliament).

Dealing with over capacity, the police chief from the suppressive State Security Forces suggested alternative deterrents saying that ‘new harsher measures are needed to deter people from breaking the regime’s laws.’

A prisoner, serving 3-years behind bars for theft, on Monday fell victim of inhumane punishment; the 39 year old’s fingers have now been amputated, the act rendering him incapable of working. ‘The state-run Khorasan newspaper identified the victim by his initials M. T.’

The Iran opposition are allied in pushing for the UN Special Rapporteur Mr. Ahmed Shaheed to “urgently take necessary and effective action to halt the wave of medieval tortures [but also executions].”

‘The mullahs’ regime continues to [condemn Iranian people with] brutal sentences such as amputation of limbs, eye gouging and stoning to death.’

And as the violation of human rights seems endemic within the mullahs’ regime, ‘corruption and embezzlement’ is also ‘systematic’ in the economy.

Critical of the so-called ‘moderate’ voices of the incoming Majlis, outgoing MP Ahmad Tavakkoli made things plain, saying “the term systematic corruption is referred to a stage when bodies that are responsible for curbing corruption themselves are involved in corruption.”

The Islamic Consultative Assembly News Agency (ICANA) reports that “some ministers, serving as boards of directors possess a wealth of 10 trillion Rials (US $329 million).”

Yet are not held accountable on criminal charges.