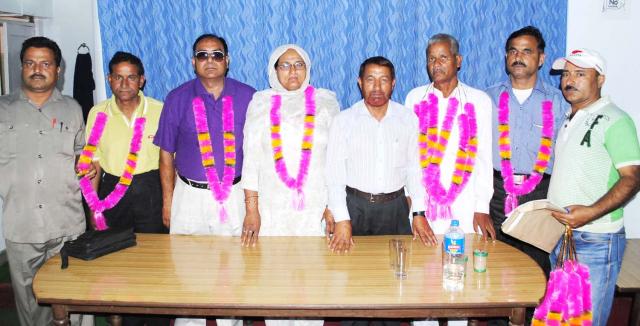 Jammu
and Kashmir: Urging government to empower elected Panches and Sarpanches with
decision making authorities enshrined to them constitutionally to fulfill the
basic purpose of development in halqa panchyats, All J & K Kissan Mazdoor
Party, President Sardar Kalu Khan Hamdard said that with out introducing 73rd
and 74th amendments in Panchyat Raj Act elected members can not work
in democratic system.

Expressing
satisfaction over huge turn out in Panchayt elections, Hamdard hailed the
people for this gesture. Hamdard while speaking reporters during felicitation function
organized for newly elected Panches and Sarpanches said that by taking part in
elections people have shown faith over the winning candidates, to which they
have to prove with their dedication and honesty.

Hamdard
said though elections were conducted on non- party basis but there were reports
that some ministers and legislators were found campaigning for some blue eyed
candidates. He said people have had voted for young, dynamic and educated
candidates to witness all round growth on the ground.

Hamdard
while replying to a query said that at the end of elections his party would be
in good positions as number of winning candidates is more than what was
expected by him. He advised the winning candidates to work for poor and needful
people for their welfare.