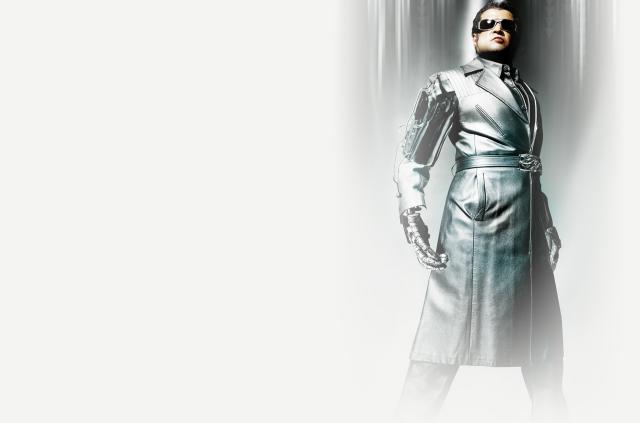 Shankar has proved yet again that he is ‘THE’ clever filmmaker in the Indian movie industry. Just listen to this album and you would know how the person who extacts music out of the music director makes a big difference in the final packaging of an album. Rahman is at his usual best churning out chartbusters. I just can’t believe he made these tracks way back in 2008, they sound so fresh !

Puthiya Manitha: This song is either during the making or when Chitti is done and finally ready. Dr. Vasikaran, talks about his Robot in this. An SPB-Rahman-Rajini number with the typical punch lines but very different from "Ballelakka" or "Oruvan Oruvan Muthalaalli" because of the technical accompaniments. And Khatija Rahman sounds good too – a mini Rahman in the making.

Kadhal Annukkal: A melodious duet number trying to reproduce the magic of "Sahaana". Looksllike Vijay prakash is the hot selling cake after "Hosaana". Shreya’s chirpy voice sounds breezy and the ‘Oh baby’ chorus is the highlight of the song.

Irumbile oru Irudhayam: The first taste of love for Chitti, the robot. Now you get one more clue about Chitti and my guess is its body has some link to insects ! And possibly Ash falls in love with Chitti? This song is rendered by Rahman himself and sounds very much similar to "Yakkai Thiri".

Chitti Dance: Now this is going to be a visual treat. Chitti does a Bharatnatyam dance sequence in this track. Well Shankar sir, if you can use motion capture way back in 1998 for Jeans, I won’t be surprised if your Chitti does everything including my morning coffee. And what a super fast rendition of Jathi !!

Arima Arima: Okay, this is where things get serious. This song must probably be placed in the second half of the movie like "Athiradi" of Shivaji or "Mudhalvane" of Mudhalvan. I expect a confrontation between Chitti Rajini and Vasigaran Rajini to win Ash’s love in this. Hariharan rocks ! and what a fanfare and march of the percussions. This is undoubtedly my favourite number of the album if I’m forced to choose only one. Vairamuthu‘s son Karki has debuted in this song…."Silicon Singam"…ha ha !

Kilimanjaro: Another duet in the album with a folk and tribal theme. You recognize it is Chinmayi during the ghamaga in first stanza’s first line. Looks like she has made a point to sound different in each and every song she renders. Ash is described as Pulicha keerai, Aatuchedi, Pasumul etc in this song. Yeah, this is the one shot in Mohanjedaro, Machu-pichchu etc. Listen carefully to the Tabla in the second stanza.

Boom Boom Roboda: This is the last and final track of the album and hopefully in the movie as well. Remember the dance sequence at the end of Jeans when all ends well? And yeah, the lyric goes on to bully Issac Asimov, Newton, Albert Eienstien and sorts. But this line "Chitti Chitt Robo" does remind me of Rahman’s previous "Thala thala thala" from New.

Well, Rahman has not reached any new musical hieghts in this album but nay, who expected that in this album anyway. Endhiran album blasts the hell out of you. Ilove it and can’t wait to watch the movie !