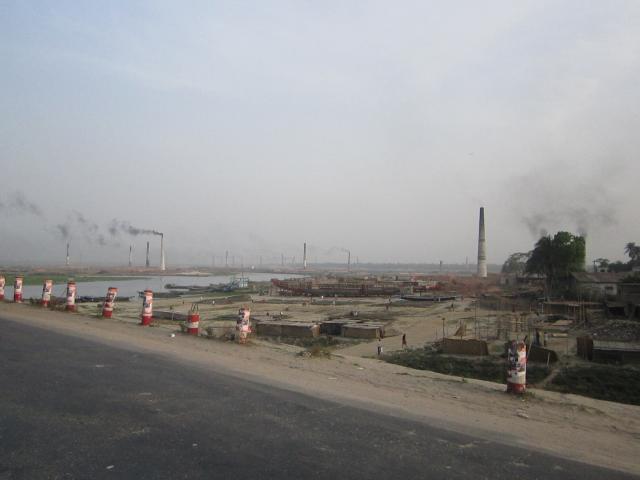 According to the 1989 and 2001 (revised) laws on brick-making, brickfields cannot be installed within three kilometres of residential areas which are densely populated, reserved, commercial, part of city corporation, municipality and upazila towns, forest areas, water bodies, agricultural land and garden so that impact on air pollution can be eased.

Irked by mushrooming brickfields across the country, the ministry of environment and forest on March 31, 2003 issued a notification against the kiln owners providing a three-month notice to shift units outside the three-kilometre zone to avoid legal measures.

The notification mentioned that licenses of faulty brick kilns would be revoked. To begin with, owners were not to have obtained a license if officials of the local district administration and the environment department visited the sites before clearing the way for a license. Under the present circumstances, it is crystal clear that these regulatory bodies are not functioning properly.

The licensing authorities of brickfields is based at the district-level administration comprising of a nine-member committee with representation from  government bodies, stakeholders and journalists and the District Commissioner holding the titular position of member secretary.

These committees were formed in 2002 through an order issued on November 6 by the environment ministry with a view to ease the field-level complications arises centring brickfield installation and its management.

Another circular dated October 20, 2002 asked the offices concerned to strictly enforce the law to preserve the environment when it lifted a 1999 suspension order on issuing licences for setting up brick kilns.

Media reports suggest the total number of brick kilns is between 8,000 and 12,000, but the numbers are soaring parallel to growing urbanisation and industrialisation. The number of illegal and faulty units across the country is unconfirmed. However, over 500 brick kilns are operating around the capital, adjacent to highways, rivers and on agricultural land.

The Department of Environment (DoE), the regulatory body for brickfields, admit the severity of the impacts of the kilns located around densely populated areas and arable land. But it does not have any study on its direct impact on human bodies, crops and water. It rarely launches drives against the illegal kilns.

Data is, however, available on the particles spread in air due to burning coal, firewood or rubber that are commonly seen. It must be mentioned that Dhaka’s air is one of the worst among the world’s 100 cities in terms of heath impacts, as found in several surveys by international organisations.

On May 22 this year, the cabinet approved, in principle, the draft of a fresh law on brick manufacturing. The new law states that maximum punishment for violation of the rules will be 10 years in prison and Tk1m fine. It was earlier one year in jail and Tk50,000 fine.

The provision of punishment for burning surface oil has been introduced for the first time – two year jail or Tk20,000 as fines or both jail and fines. The punishment will be increased up to 10 years imprisonment or Tk1m or both for repeated abuse of the law. The use of timber for burning the bricks was banned earlier too but now it is an offence that amounts to three years’ imprisonment and Tk300,000 as penalty or both. Now, the authorities can only confiscate the bricks and timber during raids.

The owners will have to face one year imprisonment and Tk50,000 as penalty for running brickfields without license whereas now the authorities are only empowered to seize bricks and other equipment. The same penalty will be imposed for running brickfields in prohibited areas. The draft act also specifies the licensing authority and controlling standards of coal used in brick kilns.

Issuing and renewing licenses has been stopped since September 2010 as the government allowed brickfield owners a grace period of two years to transform their units into high-end, energy-efficient technologies, prescribed with the aim to cut down pollution. After the deadline ended on September 30 last year, the DoE extended the period to March and later June 30. On May 18, the environment minister said the brick kiln owners must transform method of burning bricks by June.

Despite the measures, the installation and operation of illegal and faulty brick kilns is blossoming while no significant reports have yet been found over the transformation process, which the owners deem costly. Last June, the finance minister announced in parliament that 500 kilns had transformed into energy efficient ones.

The government earlier in 1999 suspended giving licences to new brick kilns in the wake of rising sulphur deposition in the atmosphere from the burning of coal at the brickfields. The November 21 circular anticipated that the situation was so vulnerable that acid rain could occur in the near future if the trend continued. Former secretary of the environment ministry Syed Marghub Morshed issued the circular sent to all the deputy commissioners. The government also expressed concern over massive burning of timber at the kilns. The suspension was lifted in October, 2002.

Emphasis on the necessity of technology transformation was put in 2009 when the UNDP began a project with the DoE to decide on a viable technology for the heavily polluting brick manufacturing industry. Upon recommendation, the DoE officials are now advocating three new methods.

In the present situation, it is imperative to effectively enforce the existing law and nothing else to protect the nature from worsening any further and to ensure rule of law in the society with a bid to change the culture of impunity.

A brief of the text was also published on Dhaka Tribune

Filed under: Health & Science, Opinion
Share Tweet Pin G Plus Email
previous article: Uzbekistan’s Move Away from Regional Afghan Response
next article: Does a Perfect Relationship Really Exist? Find Out What to Look For.