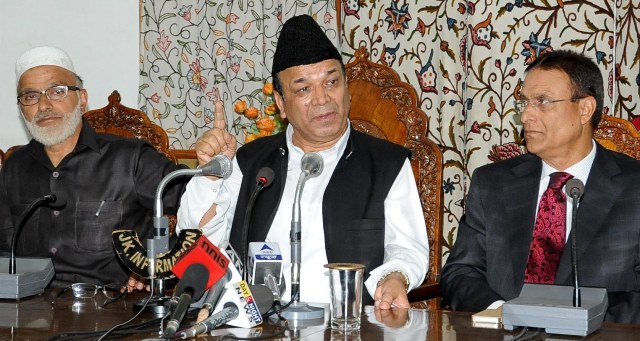 Srinagar, June 03, (Scoop News)- Maintaining that the enhancement in the retirement age of the government employees was the long pending issue and assurance given by the government, the Minister for Finance, and Ladakh Affairs, Abdul Rahim Rather has said that the same has fulfilled the long pending demands of the government employees and their unions.
The Minster was addressing a press conference at banquet hall here at around 7:30 PM in the evening after the government announced the decision of enhancement of the retirement age from 58 to 60 and the entry of recruitment age from 37 to 40 and in case of reserve categories from 40 to 43.
Ministers for Rural Development, Ali Mohammad Sagar and CA&PD, Ch. Mohammad Ramzan were also present.
Mr Rather said that the decision of enhancing the retirement age was under the active consideration of the government from long and consensus was final achieved after series of meetings with the employees and their unions. He said that since it was a long pending demand and the Cabinet while taking a considerate a view of the employees increased.
Referring to the enhancement of the recruitment age into government service from 37 to 40 and in case of reserve categories from 40 to 43, the Minster said it would increase the employment opportunities of the persons who would like to join the government sector which is one of the biggest job providers to the people of the State.
The Minister also said that the Cabinet has also decided to give one month time to different department s to provide information about the need based and casual employees so that an appropriate decision can be taken about them. This information would be accordingly passed on to the Cabinet Sub Committee constituted for the purpose and an adequate mechanism cab be formulated for them.
MORE AT http://scoopnews.in/det.aspx?q=38271