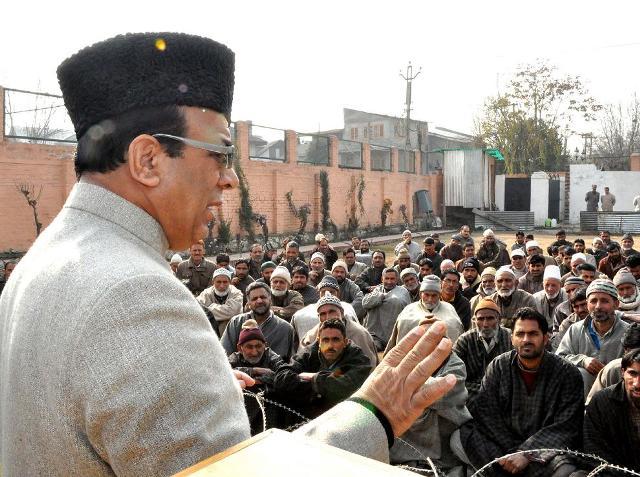 Srinagar, December 13 (Scoop News) – “Enough is enough”, the people of J&K  state now wants peace, prosperity and development,  Minister for Finance and Ladakh Affairs,  Abdul Rahim Rather  said adding that no stone would be left unturned to redress genuine grievances of the people. He said people have pinned high hopes with the present dispensation and reaffirmed the resolve to come upto thier urges and aspiration. He asked the officers to work with commitment and social obligation by responding positively to the demands and needs of the people.

Talking to people at “Awami Darbar” organised today for on the spot redressal of the grievances of people,  Rather said coming years would be turning point for taking the state to new heights of development and prosperity.

He said that despite odds, the government is committed to ensure social equality and uniform development of all the regions and sub regions of the state. He said hurdle by anti-people elements would not deter us from serving the people who have suffered immensely due to long phase of turmoil.

Visiting far flung and remote areas is to take administration at the doorsteps of the people to solve their problems instantly”, Rather maintained.

Rather said that an-unprecedented era of development has been set into motion which has no parallel in the history of the state so far. He called upon the people to lend hand of cooperation to the administration for ensuring judicious use of funds and adequate implementation of prestigious development projects. “Infact monitoring of developmental schemes by the people at grass root level would immensely help to check misuse of funds besides ensuring quality standard of works,  Rather added. He said whooping funds are available for developmental and social welfare schemes and availability of funds would not be any constraint in this regard. However, atmosphere of peace and tranquillity was primarily imperative to achieve the goal of a self-reliant model , he added.

During the public hearing, deputations from various parts of the valley called on the Minister and putforth their demands. The Minister gave on the spot directions to the concerned authorities to redress grievances of the people.