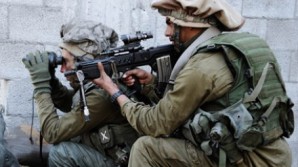 Elite Israeli infantry soldiers move into position against the enemy.

On December 4, 2014 Rep. Collins of Georgia was granted permission to address the United States House of Representatives for one minute regarding the Israel QME Enhancement Act:

My bill provided for a review of Israel’s QME at shorter intervals, from 4 years to 2 years, and I am honored the review language made it into the Strategic Partnership Act. Both pieces of legislation recognize Israel’s residence in a neighborhood of bad actors.

Over the decades since the establishment of the State of Israel in 1948, it has endured several extended armed conflicts with its neighbors. From the Israeli War of Independence in 1948 through Operation Protective Edge, the latest conflict with Hamas, Israel has endured constant threats.

Another constant is that Israel has been able to depend upon the U.S. for military assistance. During the Yom Kippur War in 1973, the U.S. conducted one of the largest airlifts in U.S. history to assist Israel.

Today, we stand on the floor of the House in support of a bill to increase its military assistance and to increase the help to our friend Israel.”