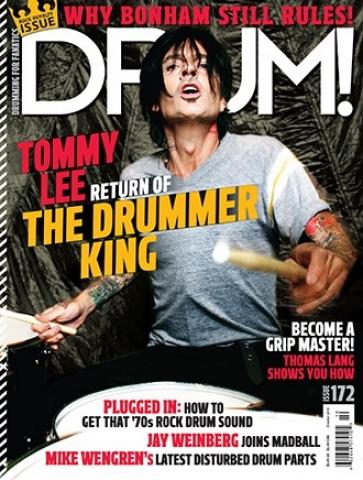 San Jose, Calif., — Enter Music Publishing, publishers of DRUM!, has published a very special “Rock Royalty” Issue. Featuring kings of the throne, Mötely Crüe’s Tommy Lee and Led Zeppelin’s John Bonham, DRUM! explores the impact of these percussion heroes in the present and the past.

And to celebrate the rock royalty issue Enter Music Publishing is offering free downloads of an out-of-print mini-book, Like Father, Like Son, featuring John and Jason Bonham. In a journalistic feat of magic, DRUM!’s editors culled John Bonham quotes from a series of interviews conducted by famed rock journalist Chris Welch, posed the same questions to Jason Bonham 20 years later, and combined their responses into a dual interview that is impossible to replicate, and full of surprises.

To get this slice of drumming history, all you have to do is register on the site.

However, the benefits of free membership go far beyond the free minibook. Drummagazine.com members also enjoy a free subscription to the LEFT RIGHT LEFT drumming newsletter, get access to the ongoing dialogue on the DRUM! Forum For Fanatics, can post comments on articles and lessons, and sell used gear on our free classifieds. And that’s just the beginning. The DRUM! staff is busy planning future benefits for members that no drummer should miss.

Without a doubt, Tommy Lee is one of the most well-respected rock drummers and has been featured on DRUM!’s cover three times. In the October issue, Lee talks about his desire over the years to be a front man and features cool transcriptions of Lee drum ditties, such as “Fight Song” from the new Methods Of Mayhem album.

As lesson transcriber Brad Schlueter explains, “Tommy Lee is much more than a great metal drummer … He has more showmanship and chops than any drummer in his genre needs.”

There is a reason John Bonham’s influence has now spanned several generations of rock bashers. Drumming historian Wayne Blanchard explores Bonham’s technique and influence, drawing on interviews from his contemporaries such as Bill Ward of Black Sabbath. “Bonham’s grooves were always in the sweet spot, and he filled the emptiness between the fours of the snare drum with triplets and polyrhythms,” says Ward.

“It’s really interesting to look at the drummers from past and present articles,” said Andy Doerschuk, Editorial Director of Enter Music Publishing. “It just proves their contributions to drumming are well founded, without a doubt.”