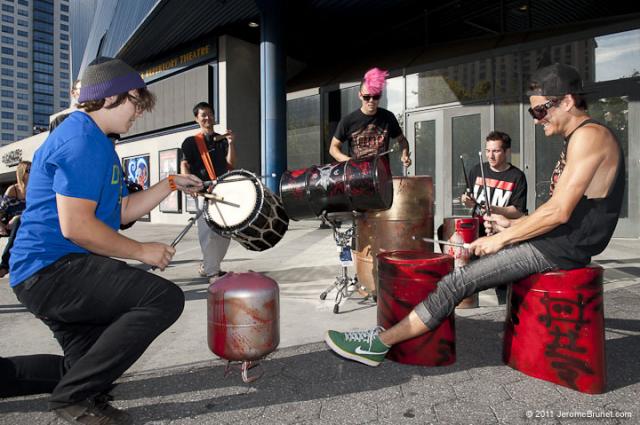 San Jose, Calif., — Enter Music Publishing, publishers of hip, drum/percussion magazines worldwide and online, proved for a second straight year that the company can produce highly successful benefits. DRUM! Night, a benefit in which all of the proceeds were donated to Lincoln High’s music program, was a tremendous success. Held in conjunction with the San Jose Jazz Festival, DRUM! Night sold out and was highlighted by a diverse drum lineup of respected drummers and percussionists. But this was no ordinary festival concert. Rather, DRUM! Night resulted in  a six hour-drummer’s event of concert, clinics, lessons, and sideshows.

Held at San Jose’s Repertory Theater, DRUM! Night had a very special, syncopated opening before it started. At 4:15, local members of Street Drum Corps conducted a jam session with Franco Imperial of San Jose Taiko, one of the nation’s oldest and most well-respected Taiko bands.
“This session was a great opener to the event,” said Phil Hood, publisher and co-founder of Enter Music Publishing. “DRUM! Night was based on the idea of having Bay Area drummers and percussionists perform for the advancement of music education locally.”
Call And Response: Performers Get Down With Guests
Another great aspect of the pre-show activities was the interaction of the performers and those in attendance. Pre-show guests were entertained with booths for autograph signings by major stars such as Jimmy DeGrasso (the current drummer for Alice Cooper who was a major force with Megadeth, Y&T, Ozzy Osbourne and other bands); Brian "Brain" Mantia formerly of Primus and Guns ‘N’ Roses, and Dino Campanella of local San Jose favorites Dredg. Other booths featured electronic drum lessons, tuneups on sticks and grips, and more. Also spotted in the crowd were local notables such as drum teacher Ron E. Beck (formerly with Tower of Power) and Francine Bellson, widow of the late bandleader Louie Bellson.
On To The Show: From Perazo Slaps To Thomas Lang Electronic Licks
The show began with an amazing display by timbalist Karl Perazzo and conguero Raul Rekow of Santana. They were originally scheduled to perform with legend Amando Peraza,who was ill and could not attend. Perazzo switched to bongos for  a solo set that dazzled the audience with his groove and the range of sounds he could pull form the instrument. One drummer backstage was heard to mutter "That shouldn’t even be possible."

Next up was Thomas Lang, performing exclusively on an electronic kit. Just recovering from hand surgery, Lang put on a dazzling performance, using the full range of sounds at his disposal to play harmony, rhythm and melody. His finale, well, was phenomenal, when he gave the audience a stick flipping lesson that left them in stitches.

Overall, DRUM! Night resulted in a number of inspired performances, including the musical presentation of the Santana rhythm section.
Bordin’s Beat Recognized
Next, Andy Doerschuk, editorial director and co-founder of Enter Music Publishing, presented the first-ever Bay Area Drummers Achievement Awards (pronounced BADAAS with tongue-in-cheek) to Mike Bordin. Bordin is most known for his drumming with Faith No More, an East Bay band that sold more than 25 million records in the 1990s. His style, rooted in big tribal drum beats, and furious fills, influenced a generation of drummers.  The award, featuring an impressionistic drum and sticks design in glass, will be given annually.
Bordin, who attended DRUM! Night, said upon receiving the award, "You don’t get a lot of awards for being a drummer.” This (The award) means so much to me.” He then emphasized to the students in the crowd, “to never give up their dreams and never stop practicing.".

Bozzio Brings The Beat As Well…

The concert closed with a performance on a massive drum kit by Terry Bozzio. Bozzio came to fame with Frank Zappa in the 1970s, and then went on form the pop group Missing Persons and perform with Jeff Beck, the Brecker Brothers and many others. He is noted for his musical approach to drum set that requires dozens of drums, cymbals and gongs.

As noted above, Enter Music Publishing conducted DRUM Night to raise money for music education via ticket sales and a raffle of drumming products. This year all of the proceeds from sales were donated to Lincoln High School’s music programs. Lincoln is a magnet school in San Jose with a great reputation for band, orchestra and vocal programs.

“Enter Music Publishing has made a commitment to conduct benefits like DRUM! Night to further music education in local schools,” Hood said. “Let’s face it. In our current economic situation, school music programs really need help from the community.”
Enter Music Publishing would like to thank the performers, and those who attended DRUM Night for making the event such a success and for aiding the company as it continues to support music education.

Filed under: Media & Tech, Music & Film
Share Tweet Pin G Plus Email
previous article: ‘Pakistan’ a victim of prolonged conflict between dictatorship and democracy
next article: Is Ferrari ready to win the next F1 gp?