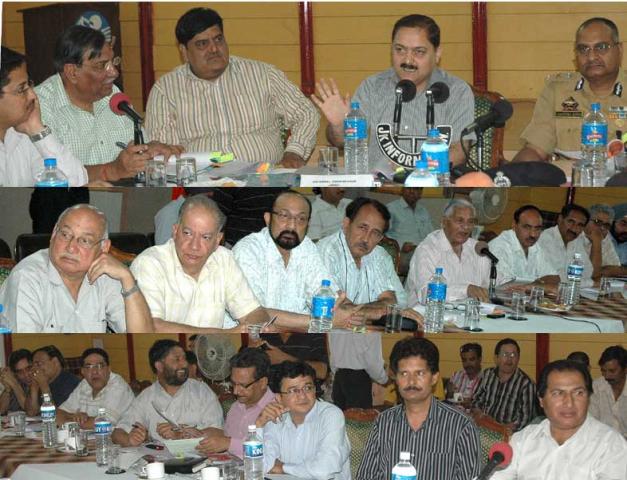 Jammu,May 15 -Asking the entire administration to gear up in view of Shri Amarnath Yatra-2009 commencing from June 7 this year, the Divisional  Commissioner, Jammu, Dr. Pawan Kotwal has emphasized on adequate and satisfactory arrangements by respective departments and agencies for the convenience of yatris.

Discussing the elaborate preparations for the ensuing prestigious yatra at a high level meeting with the senior officers of civil, police administration and various private agencies, here this morning, Dr. Kotwal said that there should be no overcharging or profiteering, adding that the devotees should be charged at approved rates whether in hotels or in any mode of transport. He warned of stern action against those indulging in overcharging.

Apprising that this year newly constructed Yatri Niwas at Bhagwati Nagar would be the base camp for Amarnath yatris, Dr. Kotwal said that utmost care has been taken to provide basic facilities to the devotees under one roof.

Saying that as the Amarnath yatra being a prestigious event is equally important for every individual of the state, Chief Executive Officer, Shri Amarnath Shrine Board, Mr. Vyas emphasized that all should contribute in whatever way for its smooth conduct and success. He informed that registration would start from May 20 in 110 J&K Bank branches across the country.

Regarding lodging arrangements for the pilgrims, it was decided that their comfortable stay has been arranged at private hotels, lodges, JKTDC tourist bungalow, Yatri Niwas, Bhagwati Nagar, dharamshallas and community halls.

The Presidents of Jammu and Katra Hotel Associations announced 30 percent discount for the yatris besides ethnic Dogra food will also be served this time. In case of any emergency, Disaster Management Plan has been framed wherein arrangements have been made at educational institutions and tented accommodations. The stay of sadhus has been arranged at schools and temples with proper basic amenities and free langer.

Transportation facilities for the devotees have been organized by the SRTC, RTO and Tour Travel Associations. Adequate buses, private vehicles and group coaches would be provided at Railway Station, Tourist Reception Centre and Yatri Niwas.

For the release of payment of previous year, Mr. Vyas asked the General Manager, SRTC and PDD authorities to submit the detail of expenditure and assured to clear their dues soon.

Dr. Kotwal said that registration counters would be opened at Exhibition ground and Tourist Reception Centre.

On security arrangements, IGP, Jammu, Mr. K. Rajendra said that fool-proof security arrangements have been made and the yatris would be immediately cleared at all frisking points as soon as they arrive rather asking them to wait for particular timings for frisking or entry to Yatri Niwas, Bhagwati Nagar. The issues of photo identity cards for officers and staff on yatra duty, installation of CCTV at Yatri Niwas, watch towers and security fencing around the police camp and open area towards River Tawi were also deliberated upon.

The PDD and PHE authorities were directed to ensure uninterrupted supply to yatris at their places of stay. Street lights would be repaired and installed wherever required. Floriculture Department would ensure landscaping on the strips along the main road to Yatri Niwas, Bhagwati Nagar. Jammu Municipal Corporation would ensure sanitation and cleanliness in and around the area..

For the convenience of pilgrims at the Yatri Niwas, points like development of shopping arcade, private shopping line, organizing of havans, langers, jagratas, establishment of police units, signage erections by R&B, strengthening of Medical Aid Centre and police assistance were also discussed threadbare.

Regarding banking and money exchange facilities, it was revealed that J&K Bank would provide mobile ATM at Yatri Niwas. Provision of general store and chemist shop would be taken care of by the General Manager, Super Bazaar, Jammu.

JDA would arrange for development of temporary parking lots while SSP Traffic would deploy special contingent of traffic police personnel for smooth regulation of traffic.

The Heads of the Departments were asked to conduct at least two visits to Yatri Niwas before first of June to ensure proper arrangements and completion of under execution projects well in time.

The Divisional Commissioner sought cooperation from government and private agencies and welcomed valuable suggestions for further improvement, smooth and peaceful conduct of Shri Amarnath Yatra-2009 which has to culminate on 5th August.