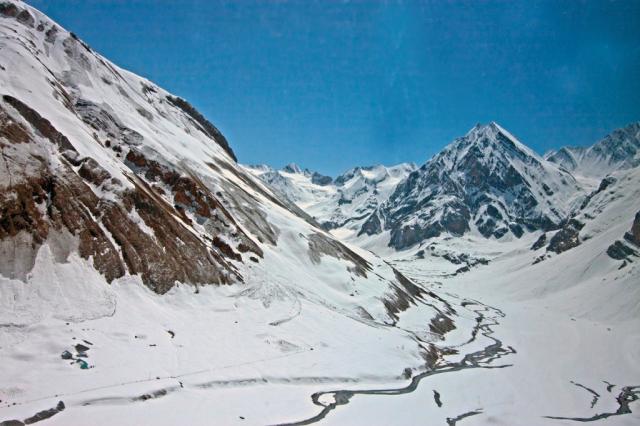 Srinagar, May 16(Scoop News) –N. N. Vohra, Governor, Chairman of the Shri Amarnathji Shrine Board, today undertook an aerial reconnaissance of the Panjtarni-Sangam-Holy Cave-Baltal circuit to assess the status of snowmelt along the Yatra route and at the various Camps along the Baltal-Holy Cave tracks.

The Governor, accompanied by  Navin K. Choudhary, his Principal Secretary and Chief Executive Officer of the Shrine Board, flew over Panjtarni, Sangam, Holy Cave and reached Baltal after taking stock of the present status of snow melt. It was observed that there is huge accumulation of snow along most of the Yatra track. Most of the structures at Panjtarni Camp are still more than half buried under snow. From Sangam and upto the mouth of the Cave Shrine, the entire area is under deep snow. Further such assessments are planned in the pre-Yatra period to determine the earliest possible date for commencing the repair of facilities at the Base Camps and enroute Camps and for launching track clearance operations with a view to ensuring that all the Yatra-related arrangements are in position well ahead of the commencement of the pilgrimage.

After undertaking the aerial reconnaissance, the Governor landed at Baltal Base Camp from where he traveled to Domel. Thereafter, he held an extensive review meeting at the Baltal Base Camp during which he reviewed the ongoing repair works, including those relating to internal drains, pathways, huts, toilets and baths, water supply, electric supply, sanitation, treatment plant, helipad, etc. Discussing the Master Plan of the Baltal Base Camp, he directed that the map of the entire Camp, indicating the location of the various services, must be displayed prominently. He also called for making adequate arrangements for daily garbage collection, illumination, fire-fighting, public address system, Information and Guidance Centre etc at the Camp. He also inspected the proposed site for the establishment of a Pony Stand at Baltal.

The Governor directed the CEO to ensure the deployment of adequate workforce for clearing and repairing the track and making it fully operational timely. He stressed that once the tracks are made operational, all the requisite facilities should be put on ground at the Camping sites, along both the tracks and in the Holy Cave Shrine area.

The Governor directed the Chief Executive Officer to ensure that all required sanitation related measures, including the operationalization of Sewage Treatment Plant at Baltal Base Camp, were taken well in time and particular attention given to ensure that all liquid wastes are effectively treated before disposal and all garbage is daily collected and deposited at the designated sites.

In the review meeting at Baltal, the Governor held discussions with  Showkat Ahmad Mir, Deputy Commissioner, Ganderbal,  Shahid Mehraj, Superintendent of Police, Ganderbal,  Mohammad Yousuf, CEO, Sonamarg Development Authority, and the District and Divisional Heads of Departments of all concerned Departments. At this meeting, all the Yatra related arrangements, proposed to be made at the Baltal Base Camp and on the Baltal-Holy Cave route by the various Departments, including the Public Health, Power, Consumer Affairs, Health, Labour, Forests, Fire and Emergency Services, Tourism, Information, BSNL, Animal Husbandry and other agencies were reviewed in detail. Also present in the meeting was Brig. Neeraj Seth, Commander, 3 Sector RR. The Governor called for daily monitoring of progress and effective coordination at all levels to timely secure the envisaged results. He asked  Showkat Ahmad Mir, Deputy Commissioner, Ganderbal and the General Manager (Works) of the Shrine Board to ensure the commissioning of all the required facilities, well in time.

As regards the implementation of the sector-wise recommendations of High Level Committee, the Governor reviewed the upgradation of the Ranga Morh-Baltal Base Camp road and of alternate road from Nilgrath to Baltal Base Camp which will help decongest the . He also discussed issues relating to the enforcement of an effective Access Control System at Baltal Base Camp and Domel and management of traffic.

Other arrangements that were discussed included deployment of Mountain Rescue Teams of the State Police at identified locations on the Yatra route; setting up of the Joint Control Rooms and Disaster Management Centres and their effective coordination with Meteorological Department; deployment of well equipped Fire Fighting Force units; provision of adequate number of X-Ray Baggage Scanning units; installation of CCTV cameras at important locations in the Yatra area. He instructed for immediate construction of Shelters in Domel area in order to accommodate Yatris in the event of natural disasters and sudden bad weather.

Preet Pal Singh, Additional CEO of the Shrine Board,  K. G. Bamba, GM Works SASB, and other concerned officers and senior engineers of various departments were present on the occasion.

The Governor is scheduled to undertake an aerial reconnaissance of Pahalgam-Chandanwari-Sheshnag-Mahagunas Top sector on 19 May and also review the Yatra arrangements at a meeting to be held at the Nunwan Base Camp.